Star plans to move to Ireland to become manager of Limerick hotel, in family’s ancestral home of 700 years, Glin Castle 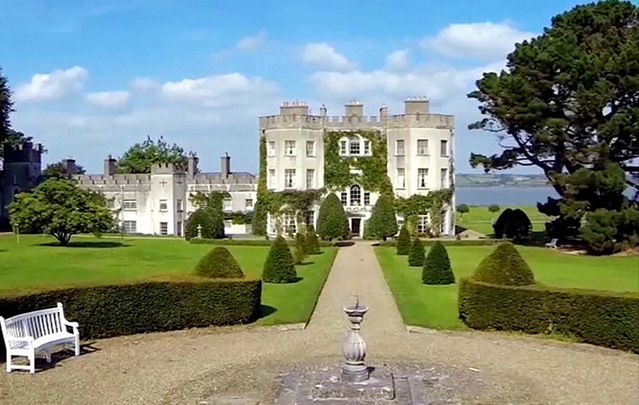 Star plans to move to Ireland to become manager of Limerick hotel, in family’s ancestral home of 700 years, Glin Castle

Actor Dominic West, star of HBO’s “The Wire,” and his family had decided not to sell Glin Castle, in County Limerick, and instead plan to develop the property as a boutique hotel.

West who married Catherine Fitzgerald, and had the reception at the family’s ancestral home said they family have “done a u-turn.” The property had been up for sale for $7.12 million (€6.5m) for several months but West said that selling the house, which has been in the family for 700 years, was no longer on the cards.

"Selling up was absolutely heartbreaking for all of us, especially my mother-in-law and my wife, and luckily we're reopening it as a hotel, all going well, sometime next year," West told the Irish Independent.

The acclaimed actor said the family would be “heavily involved” in running the hotel.

“I'm going to manage it. I want to be in charge, or as much as my schedule will allow. Obviously, there will be someone in place far more experienced and qualified than I coping with the day-to-day,” he told the newspaper.

The Last Knight of Glin

West’s wife, Catherine Fitzgerald, is the daughter of the last Knight of Glin, Desmond FitzGerald. He died in September 2011, from cancer at the age of 74, and with him died the title as he had no male children. The Knight of Glin is an ancient Irish noble title handed down by chieftains and recognized by successive British and Irish governments.

The last Knight of Glin and his family - his wife Olda and their three daughters Catherine, Nesta and Honor - had devoted a lifetime to keeping the castle going. However, the task became too much for his wife after his death and last year the castle was put on the market.

The family’s “u-turn” means that the Fitzgerald family will continue to have involvement with Glin Castle.

"We want to be there. We're going to be heavily involved. That's why we're moving home to Ireland," West said.

West and his family are currently based in London but they have retained strong links with Glin. The family enjoys holidays at the caste and West has taken part in a number of local activities including the annual Estuary Swim from Clare to Glin and outings with the local hunt, North Kerry Harriers.

Previously the family had cited issues with maintaining the large property as the reason for selling. The Fitzgerald family’s decision ends several months of debate over the future of the grounds. Appeals had been made to the Irish State and its institutions to take over the property.

Glin Castle - the property and history

The castle, located between Foynes and Tarbert, has 20,000 square feet of accommodation and 380 acres of land overlooking the River Shannon. The property also contains a commercial dairy farm, along with woodland and park areas.

Early this year West had said it was his wish that Glin Castle be preserved as a tourist attraction. He told the Limerick Leader it would be of “huge benefit to the tourism industry.”

West said “I think that these are places that must be held onto as much as possible and they must be opened up to the public for everyone to see and to enjoy.”

Through the years the Fitzgeralds made huge efforts to maintain the castle as a residence. In the 1970s they rented the home to rich international contacts, which the Knight had made while working at the Victoria and Albert museum in London. Guests have included Mick Jagger, Marianne Faithful and Talitha Getty.

Later the Knight and Olda refurbished the top floor, converting it for the first time into accommodation. They added bedroom suites and operated the house as a country hotel from 1993 to 2008. Olda also oversaw the restoration of the gardens, in particular the walled gardens.

Catherine, who works as a landscape architect, previously told the Limerick Leader “We would have loved to carry it on, but the practicalities of it are a full-time job. I work in gardens all over, my husband is away a lot in the US, and this isn’t something that can be managed remotely,” she said.

“We would love someone who has a feeling for the house’s provenance and history to take it on, and love it as we have.”

Now it seems that they will not have to give up their family home.

Wire's McNulty, one of the locals

West, a star of the small screen and stage, rose to fame in the role of the Baltimore detective, Jimmy McNulty, in the HBO crime drama “The Wire.” More recently he has started in the Sky Atlantic blockbuster, alongside Maura Tierney, “The Affair.”

The actor, born and raised in Britain (who has perfected a very convincing American accent) has deep Irish roots, including the fact that he studied theater in Trinity College Dublin, where he met his wife.

So Irish that by this time next year he could be managing a boutique castle hotel in Limerick!