Lisa McGee, the creator of Derry Girls, has confirmed that filming of the highly-anticipated season three is finally underway. 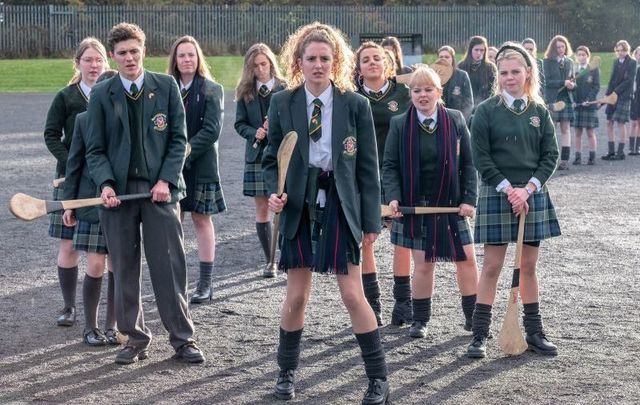 A still from season two of 'Derry Girls.' Netflix

"Derry Girls" has finally begun filming its third season, according to a tweet from the show’s creator Lisa McGee.

“We’ve come a long long way together,” McGee said in a tweet on October 4. “Let’s do this one last time!!!”

The tweet announcing that filming has begun, which had been delayed due to the pandemic, has since gained more than 19k likes.

We’ve come a long long way together. Let’s do this one last time!!! #DerryGirls pic.twitter.com/BefPXrFgOf

McGee’s tweet was retweeted by Dylan Llewellyn, who plays James Maguire, aka ‘the wee English fella’ on the hit show.

However, Nicola Coughlan, who plays Clare Devlin on Derry Girls, will be catching up with filming later on as she finishes up filming the next season of Netflix's hit series "Bridgerton."

So Derry Girls will start filming anything I’m not in first while I finish filming Bridgerton, the moment I wrap I’ll take of the corset and get back into the green uniform 💚 https://t.co/UVNcWw98m3

Filming of the Channel 4 comedy series comes less than two weeks after McGee confirmed that the upcoming third season will be the end of "Derry Girls."

"It was always the plan to say goodbye after three series," McGee said in a statement shared on Twitter on September 23.

"Derry Girls is a coming of age story; following five ridiculous teenagers as they slowly ... very slowly ... start to become adults, while around them the place they call home starts to change too and Northern Ireland enters a new more hopeful phase - which was a small, magical window of time.

"Derry Girls is a love letter to the place I come from and the people who shaped me. It's been an honour to write it and I will forever be proud of everything it's achieved.

"I'd like to thank the people of Derry and Northern Ireland for getting behind us. Thanks also to the team behind the series, the incredible Hat Trick productions and a special thanks to Channel 4 - the channel I grew up watching; the channel that made me want to write comedy and the only channel that could have made our show.

"Who knows if Erin, Clare, Orla, Michelle and James will return in some other guise someday, but for now this is it for us and we're excited to start filming this series with our incredible cast and crew to hopefully take our loyal fans on one last adventure. "