Conan O'Brien said good night to late-night during the final episode of 'Conan' on TBS on June 24, concluding 28 years as a talk show host. 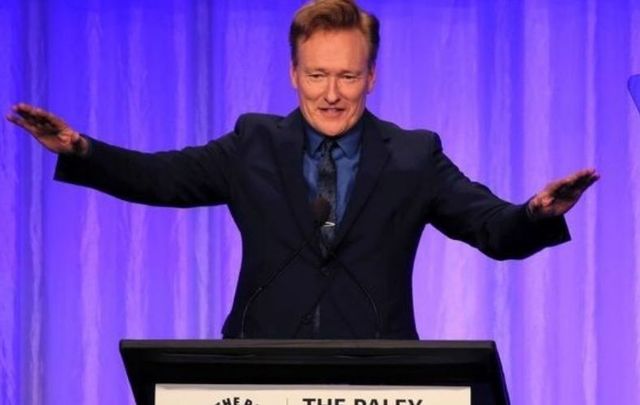 Conan O'Brien gave his goodbye to late-night during the final episode of his show 'Conan' which has been airing on TBS for more than a decade. The 58-year-old Irish American comedian has fronted three different shows since 1993.

O’Brien, who is of Irish descent, told viewers in his final episode on Thursday night that he has appeared in more than 4,000 hours of TV during his career.

In his farewell speech, the host paid tribute to his long-time sidekick, Andy Richter, his executive producer Jeff Ross and his wife, Liza, who was in the audience.

The episode, filmed in front of a live studio audience in Los Angeles, featured flashbacks to some of O’Brien’s favorite celebrity interviews, comedy sketches, and trips abroad from his travel show. Jack Black and Will Ferrell were also on hand.

It also featured a hilarious skit where Homer Simpson conducts Conan O'Brien's exit interview from TBS. (O'Brien was once a writer for the hit FOX cartoon.)

"How would your co-workers describe you?" Simpson asks O'Brien.

"I think they would say I'm fair, honest, and endlessly creative."

"You're supposed to use one word or less," Simpson replies.

Hollywood stars have paid tribute to O'Brien's long-standing career on television, in an interview with Vulture, talk show host Jimmy Kimmel said, "He’s obviously a very smart, bright guy and also just a naturally funny guy, but what is best about Conan is that he seemed to be doing things that made him laugh. I think that’s the best thing that you can do.

"A lot of people worry — I think too much — about what the audience thinks, and that never seemed to be a concern of his. I mean that in the best possible way, not as an insult. He really stayed true to the humor that he appreciated, from the very beginning to the very end."

Comedian Sarah Silverman remembered when she first met him: "In 1993, I was hired as a writer on Saturday Night Live, and that was his first year on air. He was in the same building, and everyone at SNL knew him. I didn’t, but that’s how I first was aware of him.

"At first, I was like, This guy’s weird. What is this? And little by little, I fell madly in love with the show. He brought this absurdist comedy that you hadn’t seen on a talk show."

Speaking in an interview with Vulture about his exit from late-night hosting, O'Brien, who has always been very proud of his Irish heritage, made reference to the classic 'Irish goodbye'.

"I’m not really doing press for this. I’m not looking for a lot of fanfare. I call this the Irish good-bye,' which you’ve probably heard about. Irish people are there at the party, they’re fun, people are laughing, and then at one point, you look over and they’re just gone because Irish people hate to say goodbye.

"I want to have a lot of fun with the end of this show, and I want people to be laughing and then sort of notice, 'Hey, where’d he go?"

O'Brien's next career move is to front a show for the HBO Max streaming service.