Colin Farrell, one of the stars of the box office hit "The Batman," turned up the heat during an appearance on the YouTube show "Hot Ones" with Sean Evans. 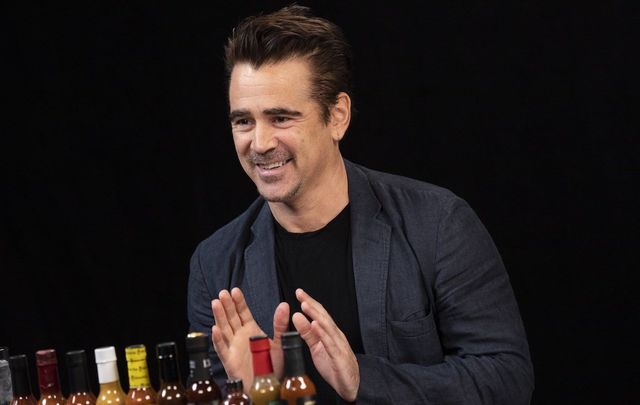 Irish Hollywood star Colin Farrell talked about his son, his love life, and the success of his current movies, "The Batman" and "After Yang," as well as classic movies during his "Hot Ones" baptism of fire.

As expected, "The Batman" slayed at the box office last weekend, bringing in nearly $130 million and another $120 million overseas. Those are great numbers and show that people are venturing back to cinemas, at least for blockbusters.

Farrell earned some great notices for his transformation into The Penguin, a character he’ll soon be revisiting as HBO Max preps for a series based on his misdeeds.

The Dublin native was on the promo trail last week, and he had a ton of fun doing the buzzy YouTube show "Hot Ones" which features celebs answering questions from host Sean Evans about their lives and career while munching chicken wings dipped in progressively hotter sauces.

Farrell revealed that he’s presently single, that he finds a “standard American accent” the hardest to imitate, and that his friends and family, particularly son Henry, were mighty impressed that his dad was going to be chowing down with Evans.

Drinking lots of water and milk as the show went on, Farrell made his way through throat burners like Calabrian chili sauce, 13 angry scorpions, pucker butt, and the finale, Da Bomb.

“You’re crushing it,” Evans told his Irish guest, who at one point stood and paced while eating the spicy wings. “I’m feeling that f***er,” he said about one of the sauces.

Farrell was a great sport and got on famously with his host, who said he was Irish too and wants to go back to Ireland for the first time this summer.

Check out Colin Farrell on First We Feast here: