Nicola Coughlan has shared the trailer for the second season of "Bridgerton," which arrives on Netflix this month more than a year after the debut of the record-breaking first season. 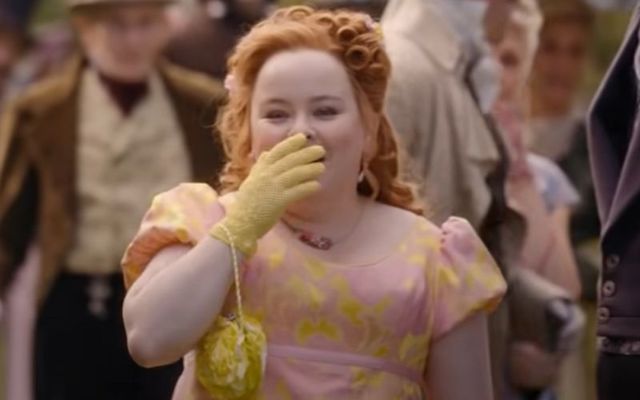 "Bridgerton" season two will arrive on Netflix around the world later this month.

“Dearest Gentle Viewers, have you missed us?” Coughlan, mimicking her role of Bridgerton’s Penelope Featherington aka Lady Whistledown, said in her tweet that has racked up more than 3,400 likes in just a few hours.

“#Bridgerton returns for Season 2 on March 25th only on Netflix.”

Dearest Gentle Viewers, have you missed us? #Bridgerton returns for Season 2 on March 25th only on Netflixpic.twitter.com/nCe1RnmglW

Coughlan, who also stars in "Derry Girls," shared the season two trailer of "Bridgerton" about a week after she said she saw the finale of the new season which set her heart racing:

I loved it so much! I didn’t breathe! My heart was doing 120bpm the whole way through! (Genuinely)

According to Netflix, the second season of Bridgerton follows Lord Anthony Bridgerton (Jonathan Bailey), the eldest Bridgerton sibling and Viscount, as he sets out to find a suitable wife.

Driven by his duty to uphold the family name, Anthony's search for a debutante who meets his impossible standards seems ill-fated until Kate (Simone Ashley) and her younger sister Edwina (Charithra Chandran) Sharma arrive from India.

When Anthony begins to court Edwina, Kate discovers the true nature of his intentions - a true love match is not high on his priority list - and decides to do everything in her power to stop the union.

But in doing so, Kate and Anthony's verbal sparring matches only bring them closer together, complicating matters on both sides.

Across Grosvenor Square, the Featheringtons must welcome the newest heir to their estate while Penelope (Nicola Coughlan) continues to navigate the ton whilst keeping her deepest secret from the people closest to her.

"Bridgerton," inspired by Julia Quinn’s best-selling novels, debuted on Christmas Day in 2020. The second season of the series was confirmed in January 2021 much to the delight of the show's massive fanbase.

#Bridgerton is officially Netflix’s biggest ever series, 82 million households have watched, I truly cannot believe it
Thank you all so much ❤️ https://t.co/5Eb4WqAUoD

"Bridgerton" has already been renewed for a third and fourth season, Netflix confirmed last April.

Shonda Rhimes, executive producer of “Bridgerton,” told Variety: “There are eight Bridgerton siblings, and as far as I’m concerned, there are eight ‘Bridgerton’ seasons. And maybe more.”

Season two of "Bridgerton" arrives on Netflix in both the US and Ireland on March 25 at 3 am EDT.