Could there be a Bono-Taylor Swift collaboration in the future?  We’ll have to stay tuned. 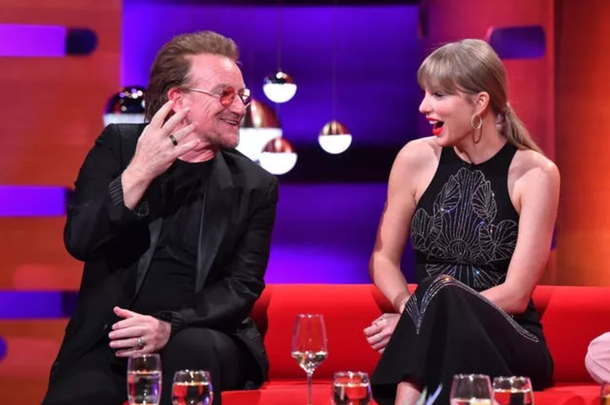 The two superstars, Bono and Taylor Swift, met each other last week on Graham Norton’s BBC chat show and professed mutual admiration. Both are on the promo trail these days; Taylor for her new album "Midnights", and Bono for his new memoir "Surrender".

When Cork-born Norton asked Taylor if she and Bono had ever worked together, she answered, “Not yet. We’re gonna talk about it later.”

“(Bono is) so nice he sent me roses when I played in Dublin,” Taylor Swift said. “He doesn’t want to take credit.  He’s a truly great person. He’s just that great and thoughtful, just the best there is.”

Wow! Bono was kind of lost for words and replied, “I better have a drink.”  He also confessed to being a Swiftie, which is how Taylor’s superfans describe themselves.

Bono takes to the road

Meanwhile Bono's on the road to promote his new memoir "Surrender: 40 Songs, One Story" with his first stop on Tuesday night at New York's historic, Beacon Theatre.

The show "Stories of Surrender" is already getting hit reviews. Variety wrote that Bono "was able to conjure the band’s early days in vibrant detail with just tables, chairs, monitors displaying his lo-fi artwork and a tasteful instrumental trio during the opening stop."

The show,  half stage play, half musical includes readings from the book, stripped-down renditions of songs and projected illustrations drawn by the singer himself.

Variety went on to describe it as "a rare evening in which one of rock’s biggest voices laid himself bare."

The book tour, which is now sold out, will continue through various major U.S. cities before heading overseas for a string of dates in the U.K. and Europe.