Take this voyage with "Belfast Girls" at the Irish Rep

In the aftermath of the Great Hunger, five Irish women take the boat to a new life in far away Australia in Jacki McCarrick's play. 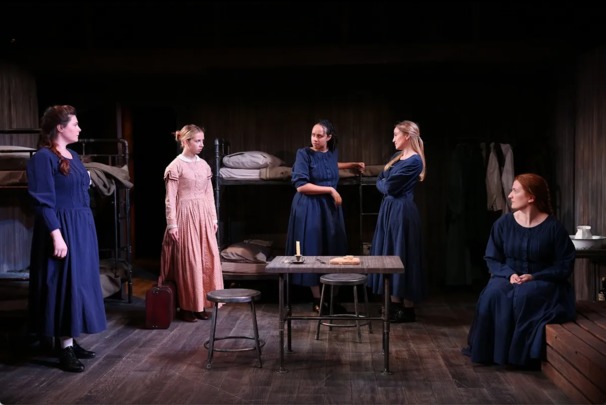 That was my experience at The Irish Rep's production of Jacki McCarrick's play "Belfast Girls." The premise is simple enough, in the aftermath of the Great Hunger five Irish women take the boat to a new life in far away Australia.

It's what McCarrick does with this simple premise that's so shattering. First she introduces us one by one to the spirited and often secretive Belfast (and Irish country) women making the journey.

They seem very glad to be going. Life has been rough where it has not been unspeakable and we get little searing flashes of the hard luck and hard use they have been put to before they boarded. 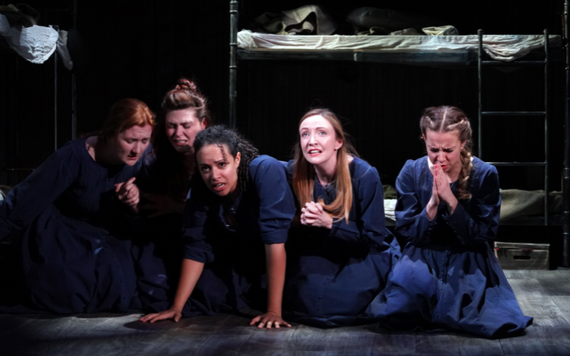 First we meet Jamaica-born and Belfast raised Judith Noone (Caroline Strange) the woman who at first seems to be in charge of the cabin. Then we meet the equally spirited Hannah Gibney (Mary Mallen) who is more than a match for any women or man she meets.

Ellen Clarke (Labhaoise McGee) is the foil that punctures Hannah's boasting and she's quiet because she carries the most life altering secrets, it turns out. Sarah Jane Wylie (Sarah Street) is the country girl with the thousand yard stare that suggests she has seen horror and finally we meet Molly Durcan (Aida Leventaki) the constantly surprising waif who there's clearly more to than meets the eye.

The secret history of women is the hidden history of Ireland, the play delicately reminds us, over and over, in a hundred convincing ways. That's why what happens on stage has all the cumulative power of a biblical revelation, that dazzles little by little until you're completely overwhelmed.

Director Nicola Murphy allows panels of the women's lives to emerge with a casual onstage pacing that underplays the storms looming up ahead, so that when they finally break you are right there with the women in the eye of it, not just witnessing but also in some ways now implicated too. 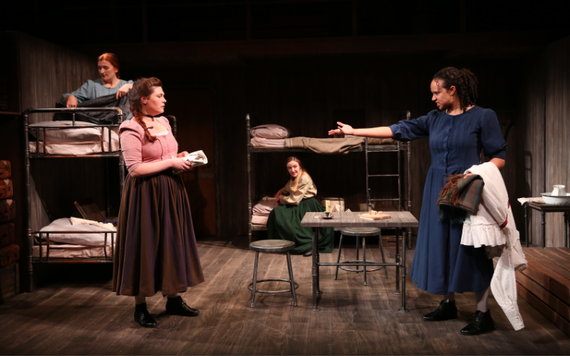 Ireland has always been ruthless in its cruel disposal of those who do not fit the narrative the country wants to tell itself and my breath was taken away when they begin to work out that they were sold a bright dream that was actually a banishment.

Before you think that this is a dark tale of woe told sorrowfully from start to finish, think again. These are "Belfast Girls."  McCarrick loves these women and her admiration and their sense of fun is infectious.

The back and forth's between Hannah and Ellen are particularly striking because they're so evenly matched. Both have each other's measure and know their weaknesses are they're both brutal in exploiting them for laughs or effect.

Sarah Jane Wylie is a fabulous creation, composed of every brains to burn country girl you have ever known but somehow poured into one person and as haunted as a ruined church. She is damage personified and Street plays her and her predicament so well it's sometimes unsettling to watch.

The slightly too good to be true aspect of the character Molly, the youngest and brightest soul on the trip, turns out to have a very good explanation. Leventaki plays this secretive character so well that we are deeply involved in her fate long before it befalls her.

"Belfast Girls" is about what the best plays are about, the fate of love. Having it, never knowing it, winning it, losing it, fearing you'll never know it, all its permutations. It's also about the ways we will permit – and not permit – women to know it or step into themselves.

"Belfast Girls" is also one of the most complex and considered portraits of the harm Ireland has done to women, and in consequence to itself, that I have ever seen. It hits you like a two by four to the chest in a way that you won't see coming.

McCarrick has found a way to smuggle in two centuries of contraband and make us take a good hard look at ourselves in her brightly polished mirror and the damage and the beauty of this broken portrait is so sad and so unforgettable that it sent me reeling into the street with my heart falling out of my chest. I can not recommend it highly enough.