This month the Irish Repertory Theatre is staging two of the plays written by Synge between 1902 and 1904, a miraculous time for him and for world drama. 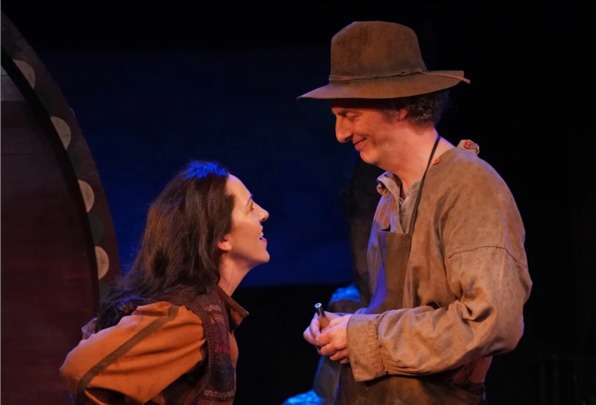 It's startling to think that the Irish playwright J.M. Synge passed away at the age of 37, having already written some of the greatest Irish plays in the canon.

This month the Irish Repertory Theatre is staging two of the plays he wrote between 1902 and 1904, a miraculous time for him and for world drama.

The Tinker's Wedding is a farcical tale about, as the title suggests, two Irish travelers. When Sarah Casey (Jo Kinsella) takes it into her head to marry her reluctant sweetheart Michael Byrne (John Keating) she runs afoul of the money-making traditions of the local priest, which involves gouging all intending couples for an ample payday.

But this kind of for-profit shakedown, which Synge eyes with good-humored disdain, coupled with the anti-clerical comments of the three other characters in the drama, came into immediate conflict with the era in which the play was written, when loudly professed (if not widely shared) reverence for “the cloth” was as an article of faith as firm as a commandment. 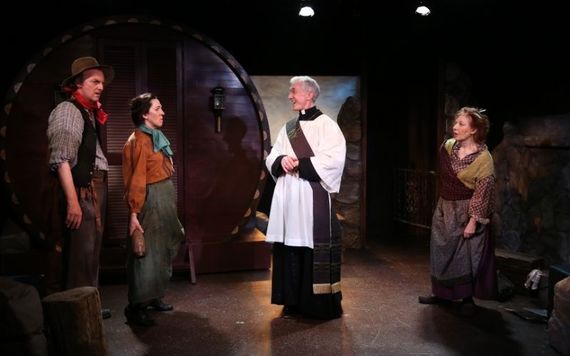 Sean Gormley has great fun portraying the play's pompous padre, whose finger-wagging concern for immortal souls is only surpassed by his concern for the bottom line. This priest has no time at all for the little people that his faith actually elevates, the poor. Worse, he adds insult to injury by grandly insulting them for their presumption in asking for his help at all.

We are in a land, Synge takes some pains to remind us, that is both close to nature and far from God. He gives Sarah two useful qualities, a great feeling for the natural world around her and a great understanding of the fickleness of men. That's why she more or less arm wrestles her suitor to the alter and feeds the priest with flattery until the task she has set herself – marrying Michael – is completed.

In Synge's world women have to be twice as capable and three times as fast and they almost always are. It takes Sarah a short while, but eventually, she understands that the respectability she's looking for will always be denied her by men like the priest and the people of his town, and learning this she realizes she'd be much better off holding onto her own money and traditions, undermining the priest's authority over her and the people around her. 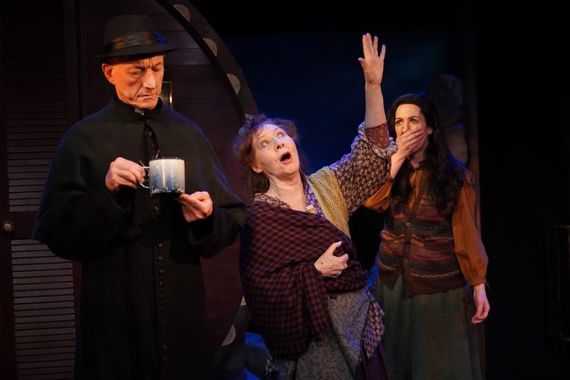 Synge can't help himself. Even in the midst of all these farcical doings, he's warning us about the danger of too much clerical credulity. Don't put your all faith into the hands of men, he warns us, and perhaps men especially.

Kinsella and Keating give such perfect line readings they bring the play and its richly expressive language to immediate life, knocking spots off each other in the Irish fashion and greatly enjoying each other's company as they do so.

Terry Donnelly plays Mary Byrd, Michael's conniving half-lit mother so well that she deserves some kind of special Synge festival award for mining the humanity and humor in every line she's given. She's the conscience of the play and its engine too and she hits every mark.

The Tinker's Wedding ends with the pompous priest, having just escaped from the burlap sack the three amigos put him in, pronouncing a sober clerical curse on all assembled. It's a weird moment for a farce to end on, but it's also inevitable. Authority finds its voice after being upended throughout the play and that giant roar would be heard, in one way or another, till the end of the century. 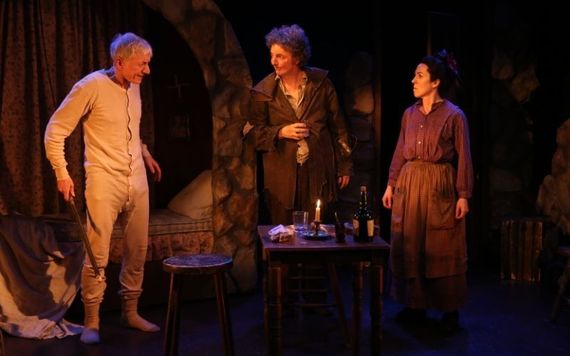 In The Shadow Of The Glen is the much better play of the evening, thematically and artistically. In this Ibsen meets Ireland story, we encounter the lonesome young widow Nora Burke on the night of her much older husband's death.

Now counting her savings because this loveless saga with her old, odd husband has finally come to an end, she hears a loud knock on the door. It's a dark and stormy night. A homeless tramp has come calling to take shelter from the rain.

It may seem like a setup for melodrama but Kinsella finds the pathos and poetry in every line she speaks, turning this one act into what the playwright intended, an alternatively searing and scornful meditation on the way that men curtail the paths of women, then blame them for the theft.

Synge's language is often incantatory, spell-like in its richness and expressiveness, and the play belongs to Kinsella and Keating, who between them make room for the imagination to press back at the chains some people try to throw around them. It's a beautiful, dark play given rich life here. Don't miss it.