Tadhg Fleming and his family brought the 'triangle dance' craze to Co Kerry. 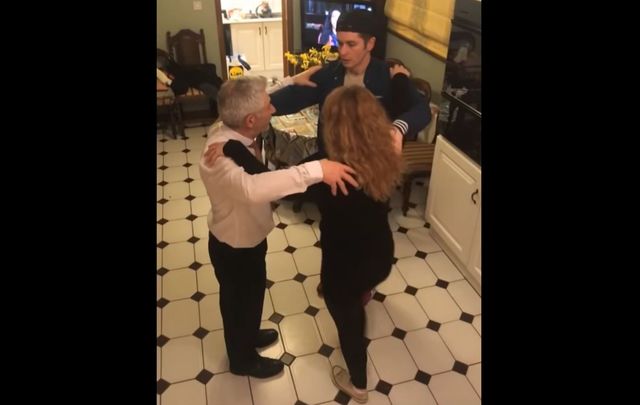 The Flemings are at again! The Co Kerry family takes on the latest Internet craze Tadhg Fleming, YouTube

The Fleming family in Co Kerry family went viral with their Irish twist on The Triangle Dance in 2019.

Tadhg Fleming and his family, known for their hilarious TikTok videos, posted an Irish dance spin on the ‘triangle dance’ craze that was sweeping the Internet.

You may remember Tadgh Fleming from a few years back when he videoed his parents attempting to get a bat out of their kitchen, which of course went viral.

“Catch him, Derry!” Tadhg yells at his father who chases the bat around with a handkerchief and towel.

Can you believe it's been one year already!驪Read more about the County Kerry family who went glboal with their hilarious episode in the kitchen : http://bit.ly/2wO6qcL Video: Tadhg Fleming Instagram: www.instagram.com/tadhg_fleming

Tadgh got his parents - who we must say are very good sports - back in front of the camera yet again to film their own version of the ‘triangle dance.’

For their 'triangle dance' attempt, the Fleming family danced along to Flogging Molly’s ‘Devil’s Dance Floor’ and added in some skip-2-3’s for a uniquely Irish take on the Internet craze.

In his original Facebook video, which has amassed more than 1.5 million views, Tadgh Fleming said: “Safe to say that Triangle Dance tested us,” followed by the hashtags “#DerrysLegsCouldntKeepUp #TriangleDance #TeamWorkMakesTheDreamWork”

Needless to say, the Fleming family triangle dance went about as smoothly as poor old Derry trying to catch a bat in the kitchen.

Watch the video here and thanks to Tadgh Fleming for sharing!

We’re loving this! Our favorite Irish family, the Flemings, are back with their own take(s) on the Triangle Dance craze! Video: Tadhg Fleming

Have you tried the triangle dance yet? Let us know in the comments!