WATCH: Irish music and dance session breaks out on flight to Kerry

The pupils from St Brendan's College in Killarney, Co Kerry delighted their fellow passengers with their musical talent 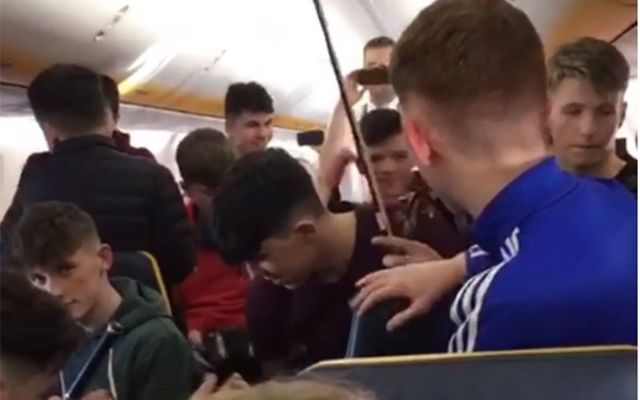 Even the worst of flyers would not have minded getting on this recent flight from London to Kerry, especially if they were fans of Irish music and dance.  Ryanair Instagram

Harmonies and steps while flying home to Ireland? The lads from St Brendan's College in Killarney, Co Kerry put on quite a show mid-flight!

Even the worst of flyers wouldn't have minded getting on this flight from London to Kerry, in January 2019, especially if they were fans of Irish music and dance.

A group of Irish school lads from St Brendan's College in Killarney, County Kerry, were on their way home from London Stansted when they decided to pull out their traditional instruments. They then warmed up their vocal cords and treated the rest of the passengers to a step or two to pass the time on the short flight.

The talented group of young men can be seen in the short clip singing, harmonizing, clapping, and cheering along as some of their classmates play away in delight.

As if the performance wasn't already great enough, two of the lads decide to up the ante and jump up from their seats to showcase footwork that Michael Flatley would be proud of.

"The music class from St Brendan’s College in Killarney had their Irish trad instruments with them on yesterday's flight from London Stansted to Kerry," the Instagram post read.

"And they put on quite a show."