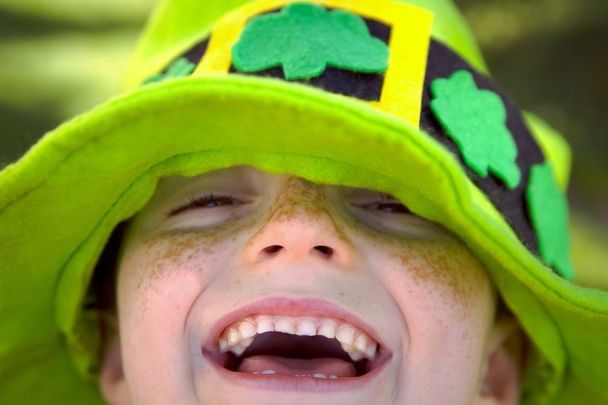 Wearing green, however, interfered with the portrait studio's green screen process, resulting in some hilarious proofs.

“He had a dark green shirt on, the top of his hoodie is green, so he turned into a fence here,” parent Amanda Snow told NBC affiliate WTHR while showing the proof of her kindergarten son Oliver’s school picture.

“And he had a green mohawk, but that is completely gone,” she added with a laugh.

Snow said it was “kind of hard to explain” to her young son what happened, but that he "thought it was really funny.”

After receiving the picture proofs, Snow said she posted in a local moms group on Facebook asking if anybody else had “funny pictures from St. Patrick’s Day.”

Principal Kristin Rodman said in a message to families: "As many of you may have noticed on your child’s spring pictures, it looks a little funny due to the green screen and St. Patrick’s Day.

"While I know you got a good laugh, the proofs are the only pictures that will look that way. The actual pictures if you order them will look normal."

In a statement to WTHR, Inter-State Studio said: "The green screen process involves taking a picture in front of a solid color (in this case green) and dropping that background out to be replaced with a background of someone's choice in post-production.

"We try to get digital proofs in front of people quickly, so this is an example of seeing it before it goes through that post-production process. Typically, this is caught in an earlier, automated stage. This image is not the final product because it gets fixed in post-production."

The studio added: "We appreciate the opportunity to respond to this specific instance - everyone has had such a good sense of humor about this!"

Despite the photo studio saying they’ll correct the errors, Snow said she might reach out to see if she can get final versions of the unedited ones “because honestly, they’ve brought me so much joy and laughter.”