Sam the fox had two males vying for her attention while she was in heat last month, according to Trinity College Dublin staff. 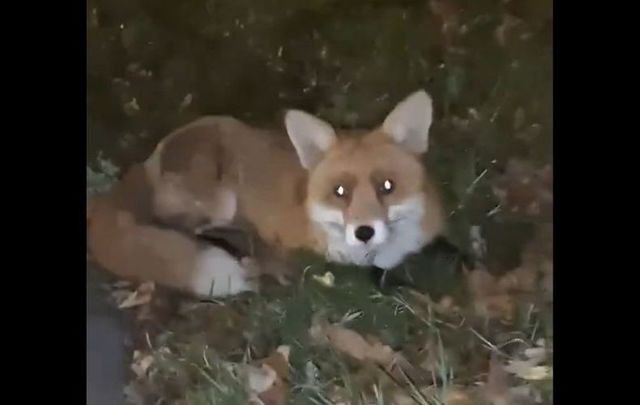 Staff at Trinity College Dublin have been keeping tabs on Sam the Fox in recent months. @collieennis, Twitter

Sam, the fox that is frequently spotting roaming the grounds of Trinity College Dublin, is reportedly expecting her first set of cubs.

Sam is well-known to staff at Trinity College Dublin who have been keeping tabs on her for close to a year.

Collie Ennis, a Zoology Research Associate at Trinity, told Claire Byrne Live on Monday that two male foxes, Prince and Scar, were vying for Sam's attention while she was in heat last month.

“Prince was hanging around at first, and everything seemed to be going quite well and they were quite happy out on the campus, mating in broad daylight, giving us all a bit of a laugh," Ennis said.

“But Scar, who we think comes from the Ringsend direction of town, he started making his presence felt around the college. Prince wasn’t having any of that, and there was a couple of altercation on campus.”

“Yeah, he was ran off,” Ennis said with a laugh, “It was pretty hardcore. Poor Scar is running with his tail between his legs.”

Foxy Montana just got the arse torn off him by Prince. Legged it out the back gate with his tale between his legs.
Exciting times!

Ennis added: “Sam and another female fox were resident on campus for a good while. Sam got quite ill, we treated her for mange, and she bounced right back. The other female fox seems to have disappeared, could be a traffic accident or she could have moved on to different territory.

Happy to report I managed to get Sam the @tcddublin fox to take some medicated bait this morning to treat her mange. This one & done treatment should cure her completely.
Thanks to Pearse Stokes of @KildareAnimals for providing the treatment & his expertise.
Chuffed! 🦊❤ pic.twitter.com/qQSPO2yGz7

“But now it’s Prince and Sam on campus and they seem to be settling down to den. Hopefully, we’ll see cubs come March.”

Ennis said his team is in touch with Trinity’s communications department and plans are underway to install “camera traps” around campus to monitor the cubs and keep people up to date since “people have really taken Sam to heart.”

Ennis shares regular updates of his interactions with Sam the fox on Twitter:

Chatting to Sam the fox of an evening in work the past few months has been just wonderful.
She's absolutely beautiful.

In May, Sam was spotted nosing around Grafton Street which, at the time, was all but deserted thanks to lockdowns.

In late December, Sam was hit by a bus, but made a full recovery, according to a report in TCD’s student newspaper the University Times,

Not long after the bus incident, Sam the Fox caught the blame after “a strong smell of fox urine” was discovered in a room close to the Taoiseach’s office on Merrion Street.