This story will sure brighten up your weekend! A Northern Irish postman managed to deliver a letter with only a first name, the name of the village, half the postcode and half a life story. 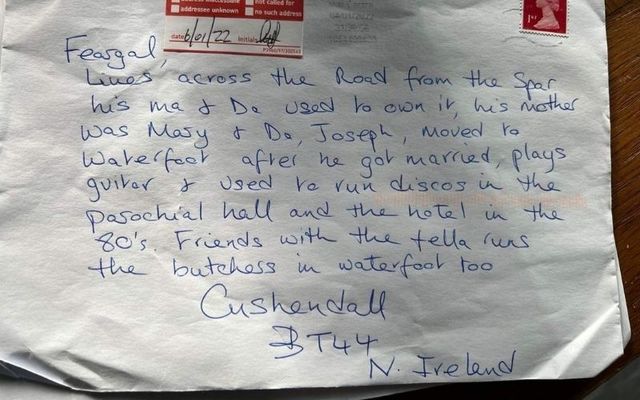 A County Antrim man has praised the Northern Ireland postal system after he received a letter despite missing one important detail - his address.

A Twitter user named Fergal Lynn got a surprise during the week when a letter landed on his doorstep and instead of his address being on the envelope, the sender had included Lynn's life story in the hope it would make it to him.

Sharing the funny moment on Twitter, Lynn praised the Royal Mail postal service for still managing to deliver the letter to him and for giving him a "much needed laugh."

Hearty applause to @RoyalMail Cushendall and Ballymena for being able to deliver this letter to me today got a much needed laugh ! … they had first name, the village where I grew up and half the postcode .. the rest is more like my life story ! #thisisyourlife pic.twitter.com/IYhZiegz58

Armed with only Lynn's first name, the village where he grew up and half the postcode, as well as a very detailed description of his life story, the postman was able to track him down.

The back of the envelope read: “Fergal, lives across the road from the Spar, his ma and da used to own it, his mother was Mary and Da Joseph, moved to Waterfoot after he got married, plays guitar and used to run discos in the parochial hall and the hotel in the 80s. Friends with the fella runs the butchers in Waterfoot too.”

Over 7.4K people have liked the tweet so far and it has left some people very impressed with the postman's skills, while others have shared similar experiences. One user wrote, "Reminds me on the letter, my 7-year-old granddaughter, Cora sent to me from Stirling recently. It arrived the next day. Posties are great!"

Reminds me on the letter my 7 year old grandaughter Cora sent to me from Stirling recently. It arrived the next day. Posties are great! pic.twitter.com/y7qTnPd1CU

When asked by the Belfast Telegraph if he was surprised his local postman managed to track him down from the writing, Lynn said “yes and no”.

"If it was anywhere else I imagine the posties would have just shredded it or returned to sender,” he added.

"I know the postman and he knows me so I think when he saw it he knew who that was going by the detail.

"He told me he went into the main sorting office in Ballymena this morning to get post and that letter was sitting separate from everyone else's. The main guy in the sorting office asked him if he had any idea who it was and he read it and knew it exactly who it was.”

They say Ireland is a small county but moments like these make you realize how small it truly is!