Ever wonder what it's like to be on stage for the thrilling "Planet Ireland" finale routine from the Irish dance show "Feet of Flames?" 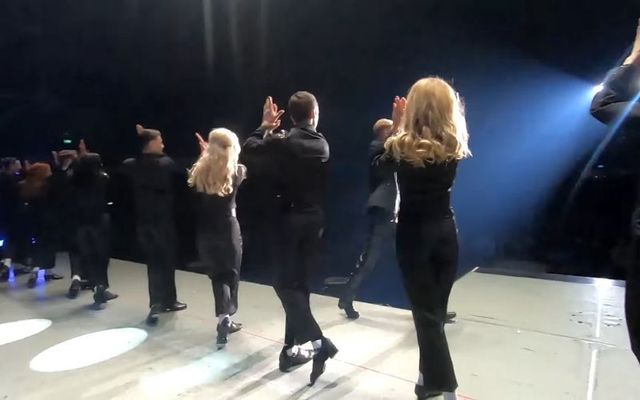 The "Planet Ireland: the Final Encore (First-Person Onstage)" video shows what it's like to be a part of the world-famous Irish dance routine. Michael Flatley's Lord of the Dance, YouTube

The team behind the world-famous Irish dance show "Feet of Flames" has shared a unique perspective of what it's like to be on stage for the show's iconic finale routine entitled "Planet Ireland."

Irish dancer Olivia Graydon was outfitted with a GoPro as she went out on stage during the final moments of Feet of Flames Impossible Tour in Taiwan, while fellow Irish dancer Alasdair Spencer's DSLR camera was set up to film the routine.

The video captures the final encore from the Feet of Flames Impossible Tour as it was performed in Hualien, Taiwan over a year ago.

While the scenes are undoubtedly thrilling, perhaps most enjoyable is the enthusiastic hooting and hollering heard from the Irish dancers as they take the stage.

Take a look at "Planet Ireland: the Final Encore" here:

The special video was shared across the Lord of the Dance social media accounts on December 31, just ahead of the return of "Feet of Flames" to Taiwan in February.

A caption for the video said: “The Feet of Flames Impossible Tour was second in difficulty only to the monumental challenge of getting the original show up and running in 1996. Touring a massive Irish dance show at the height of a global pandemic with a 90-strong troupe that was more than fifty-percent new and had only three days of group rehearsals, absolutely everything was stacked against Team Lord's success. But despite the odds, Lord of the Dance triumphed."

The caption continues: "Filming a closing night is always a bittersweet experience -- doubly so for the Impossible Tour, since it was unclear when Team Lord would be able to tour again due to the pandemic; emotions were running *very* high."

"This footage is as close as you can get to being part of Team Lord without spending the first fifteen to twenty years of your life in hardcore training," the caption notes.

Michael Flatley's Lord of the Dance is touring its new 25th-anniversary show across Europe this year, while Feet of Flames returns to Taiwan in February.