The hilarious moment a man slipped on ice on live TV remembered with a plaque ten years on. 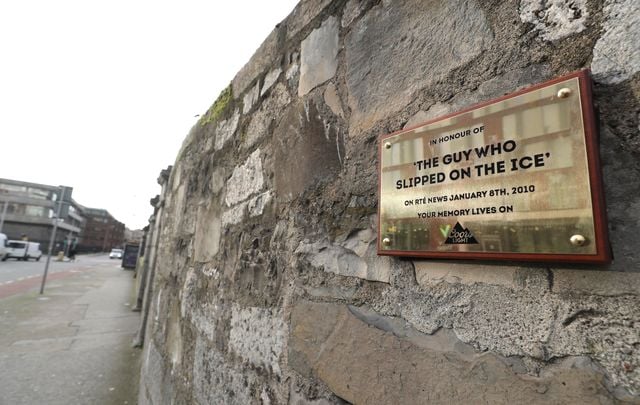 A plaque to remember "The man who slipped on the ice." Coors Light/Twitter

The hilarious moment a man slipped on ice on live TV remembered with a plaque ten years on.

Can you believe it? It has been ten years since one of the most famous moments on Irish TV! Yes, a whole decade since this poor man met his comeuppance on a patch of ice just as an Irish TV news camera fixed its sights on him.

He quickly found viral stardom, was affectionately known as "the guy who slipped on the ice," and the camera crew confirmed that he as completely ok afterward, despite him never being identified.

"I was out all day covering the snow and in fairness @DubCityCouncil had done a great job on most paths, that shot happened at the end of the day near the court's office," tweeted a man called Colm McCaughey who said he was the cameraman on duty that day.

"We were just about to wrap and I left the camera in record and yer man came galloping along."

He was either Korean or Chinese and said he was fine after the fall.

Yesterday, January 8, 2020, marked the tenth anniversary of the slip, which aired on the news on RTÉ and in commemoration, a plaque has now been erected on the Dublin street where the fateful fall took place.

"In honour of 'The guy who slipped on the ice' on RTÉ News January 8th 2010," the plaque on Church Street reads.

"Your memory lives on."

Not all heroes wear capes. Some wear winter coats. We decided to honour 'the guy who slipped on the ice' 10 years on... pic.twitter.com/jxrnuh5dDx

The plaque was sponsored by Coors Light, who wished to honor the moment despite us never finding out who the man really was.

"There are a few key moments on Irish television that are memorable enough to talk about again and again. We felt this deserved a resurgence," said Conor McIntyre, Senior Brand Manager at Coors Light.

"We've recently completed The Rockies Awards, rewarding victories in life, big and small and we thought this lad definitely deserved some recognition for making it on to RTÉ News, ten years ago!"

Have any funny videos for us? Be sure to send them on to us at editors@irishcentral.com.