Patrick the pony, who was born on St. Patrick's Day and frequents the local pub for some Guinness, has been elected mayor of Cockington in Devon, England. 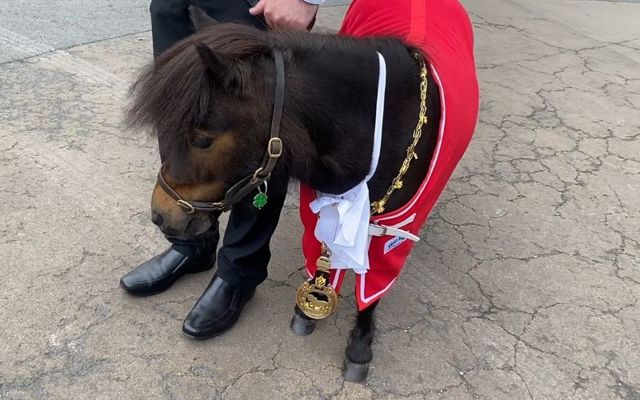 Patrick the Pony is the new Mayor of Cockington. Celebrity Pony, YouTube

Patrick, the four-year-old Guinness-drinking pony, has been declared the "mayor" of Cockington, a village in Devon, England.

Patrick the Pony, who was born on St. Patrick's Day, can often be found in the village's local pub, The Drum Inn, enjoying a pint of Guinness in a special corner reserved just for him, according to the NY Post.

The miniature Shetland pony became a regular at the pub after his owner Kirk Petrakis, 42, took him there to help locals who were struggling during the Covid pandemic.

Happy Saint Patricks day! 🍀 Join us and Patrick at the bar this evening from 5pm to celebrate Patricks birthday.

After the mayor of Cockington, Don Mills, passed away in 2019, some 200 locals signed a petition in support of naming Patrick the pony as the village's next mayor.

"We believe Patrick would be a brilliant Pony Mayor for Cockington, for being non judgemental and genuinely caring and supportive to all," Petrakis wrote on the petition.

Patrick has now been appointed the “unofficial mayor” of the town and even has his own office.

Patrick continues to work as a therapy animal at hospitals, mental health wards and specialized schools. He's even had a children's book about him published entitled "The Adventures of Patrick the Pony: The Ten Ducklings."

Petrakis noted on his online petition that Patrick is also the mascot for The War Horse Memorial, and he has helped raise thousands of pounds for equine charities. He is additionally the official Mascot for Devon Recovery Learning Community, who are partners of the NHS, supporting many with mental health and recovery.

Petrakis told the Mirror, “We think Patrick The Pony has made history by becoming the first pony Mayor in the UK.”