After a bit of horseplay in Carrickmacross, gardaí in Co Monaghan were happy to reunite a fugitive pony with his rightful owner. 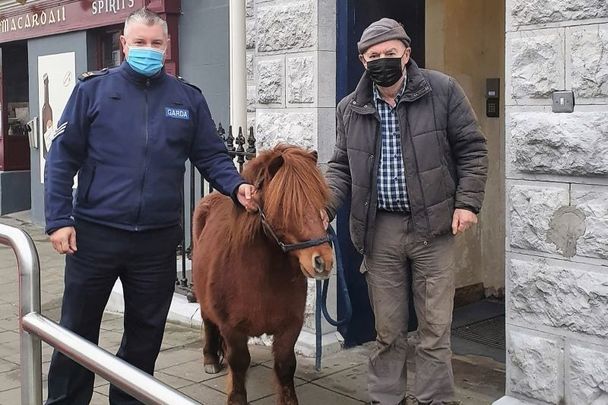 A pony has been reunited with its owner after being taken into "custody" in a Co Monaghan Garda station on January 18.

The pony was said to have been “playing havoc with traffic on the Main Street” of Carrickmacross and was taken by gardaí into the local Cavan Monaghan Garda Division station.

In an online post, local gardaí said the pony “thankfully came quietly” and a video showed the pony being led through the station by a member of the gardaí.

The Gardai in Carrickmacross have a pony in custody this morning. This chap was playing havoc with traffic on the Main Street. Thankfully he came quietly.🐎🐎if you own him please contact the station.

An online appeal was then launched to reunite the pony with its owner, with Carrickmacross gardaí saying regular checks were being made on the “prisoner” who was offered “release on bale, but he just ate it”.

In the online appeal, the owner was also urged to bring a shovel to the station and told that there would be “neigh problem” in handing over the pony.

The early unit in Carrickmacross had to check on last nights prisoner. If you know where his usual home is please let us know. We tried to release him on bale....but he just ate it. If it's your pony, please call to the station and we'll hand him over, NEIGH problem! Oh and one more thing....bring a shovel!

A few hours later, the owner arrived at the station and Carrickmacross gardaí said they were “delighted to reunite this wee fella with his owner”.

The Gardaí at Carrickmacross were delighted to reunite this wee fella with his owner. We would like to thank all the...

Carrickmacross gardaí thanked the public for their assistance in sharing the appeal online and paid special thanks to those who offered to provide food, transport, and temporary accommodation for the station’s visitor.