Mulligan's Fireside Pub has "the best burgers in the Bronx," according to Ice-T, who was filming "Law & Order: SVU" at the beloved Irish American spot. 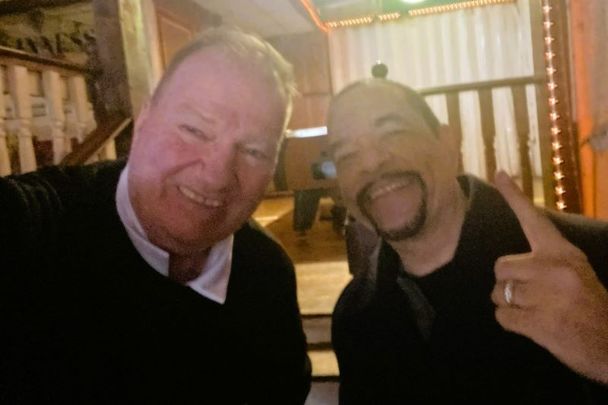 The long-running NBC series "Law & Order: SVU" filmed an episode at Mulligan’s Fireside Pub in Woodlawn last week, and star Ice-T charmed his hosts and proclaimed the Fireside burger as the best in the Bronx.

This time two years ago, publican Tommy Mulligan, second-generation owner of John Mulligan’s Fireside Pub in the Woodlawn section of the Bronx, was fretting about the survival of his business as Covid-19 restrictions took a massive toll on the hospitality industry and indoor dining was either shut down or restricted in New York’s five boroughs for months.

Nowadays, the Fireside has resumed normal operations and is even hosting TV stars and film crews. On November 3, the long-running NBC series "Law & Order: SVU," starring rapper/actor Ice-T, took over the Fireside to film scenes for an episode that will air on Thursday, January 5.

Ice-T spent the day in the Irish neighborhood and enjoyed a Fireside burger that he proclaimed as “the best in the Bronx."

It's been quite a comeback for the Fireside and Mulligan, who during the darkest days of Covid thought he might lose the pub/restaurant founded in 1977 by his parents John and Margaret, immigrants from Co Leitrim.

“All of the businesses were afraid and some didn’t survive. I probably would have, but it would have been close,” Mulligan told the Irish Voice, sister publication to IrishCentral, on Monday.

“I have to give so much credit to Dave Portnoy and the Barstool Fund which gave us a grant that helped so much. They did everything they said they were going to do to help us,” said Mulligan of the emergency Covid relief fund for small businesses founded by Portnoy and his Barstool Sports.

The Fireside was selected by the Barstool Fund in January 2021 after Mulligan’s daughter KatieLynn sent Portnoy a video on her father’s behalf.

Location scouts for "Law & Order: SVU" – a staple of NBC’s lineup for 24 seasons, making it one of the longest-running series in TV history – approached Mulligan about taking over the Fireside for a day of shooting, and he immediately agreed. His pub had been featured in movies before – "The Hoax" in 2006 starring Richard Gere, and "God’s Pocket" with Philip Seymour Hoffman in 2014 – so he knew the drill.

“The location director said he wanted our place in particular. He had talked to someone who had looked at the Fireside as a possible location to film 'Ray Donovan' a few years ago and said we’d be perfect,” said Mulligan, referring to the Showtime series that ended in 2020.

A production crew arrived at 8 am on Thursday, November 3, causing excitement around the Irish Woodlawn neighborhood. Mulligan was in his bar at 5:30 am getting ready for the day.

“They put an Irish flag over the TV in the center of the bar so the episode will include an Irish bar in some way,” says Mulligan.

The crew removed some photos on the wall and turned the liquor bottles behind the bar sideways so the brands couldn’t be detected. Other than that, not much was changed in the interior so it should be recognizable to regulars. Filming finished up around 5 pm, and the Fireside was ready to open for customers a couple of hours later after its brush with stardom.

Ice-T, says Mulligan, “could not have been nicer. What a great guy he is.”

The rapper-turned-actor, who has played Sergeant Fin Tutuola in the series since 2000, was on set for most of the day and gladly posed for photos. The Fireside is known for its burgers, and Ice-T ordered one for lunch. Mulligan’s three daughters were there and decided to do some PR for the family business.

“They went over to him and asked how the burger was and he said it was fantastic. So the girls then asked if he wouldn’t mind giving us a shout-out and he said of course he would,” Mulligan says.

Ice-T stood next to KatieLynn Mulligan while another daughter filmed. He made a convincing case for the Fireside burger menu. “Listen up man, this is not a lie, the Fireside has the best burgers in the Bronx. Stop playin’!” he enthused.

The short video is up on the Fireside’s social media feeds and it’s already made a difference, Mulligan says.

“We didn’t tell him what to say. He did it himself. And now I’m seeing some faces that I don’t know ordering burgers because Ice-T said they were so good,” he adds.

All in all, it was an experience to remember after the perils of Covid. And January 5 will bring more fun, as Mulligan and his daughters plan to have a Hollywood-style party for their "Law & Order: SVU" episode when it airs at 9 pm.

“We’re going to have a red carpet and velvet ropes, drink and food specials, the whole nine yards. Why not?” Mulligan says.