President of Ireland Michael D. Higgins has welcomed a new Bernese Mountain Dog named Misneach into the mix after the passing of Síoda. 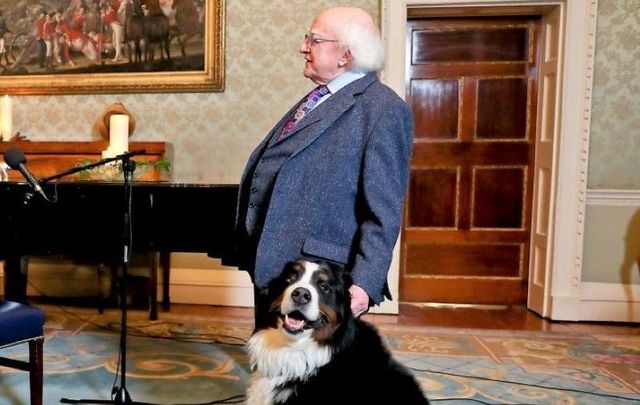 President of Ireland Michael D. Higgins has been spotted in recent days with a new pal - a Bernese Mountain Dog puppy - at his side.

“I can confirm that the President has a Bernese mountain dog puppy in training," a spokesperson for Áras and Uachtaráin said on Tuesday.

“He is five months old and, given the time we are in, the President has given him the name ‘Misneach’, which translates as Courage.”

"Given the times we are in, The President has given him the name 'Misneach' - meaning Courage" pic.twitter.com/k3ArXvW8lS

The confirmation of the new presidential pup comes after Extra.ie published pictures of the positively precious pup on February 27, warming hearts across Ireland.

Misneach won’t be alone in tagging along for presidential adventures - he’ll have Bród (meaning pride) at his side, as evidenced in the snaps published by over the weekend.

Misneach joins the Irish presidential crew just a few months after the death of Síoda (meaning silk), President Higgins’ other Bernese Moutain Dog, who sadly passed away in September following a short illness.

Together, Síoda and Bród couldn't help but steal the limelight at presidential functions and were even photographed alongside Prince Harry and Meghan Markle during the duo’s royal visit in 2018.

President and Sabina Higgins welcomed the Duke and Duchess of Sussex to Áras an Uachtaráin. https://t.co/VecILMtkvz #RoyalVisitIreland pic.twitter.com/QwNaQHLxgm

On March 9, 2020, a video of Bród working the crowd at an  International Women’s Day event at Áras an Uachtaráin went viral:

President Higgins once said that his dogs were not just ice-breakers during important visits, but sources of wisdom and knowledge as well.

In October 2018, an “official unofficial” Twitter account run by none other than Síoda and Bród was launched and quickly developed a cult following. At the time of publication, the humorous Twitter account has attracted more than 21.3K followers.

Welcoming Misneach into the mix, Bród “tweeted” the upcoming lessons for his new pal: