A Brooklyn creative label, who created Nike Air Max sneakers including Holy water, crosses, angels, and a Bible verse, sold out of their controversial design in minutes. 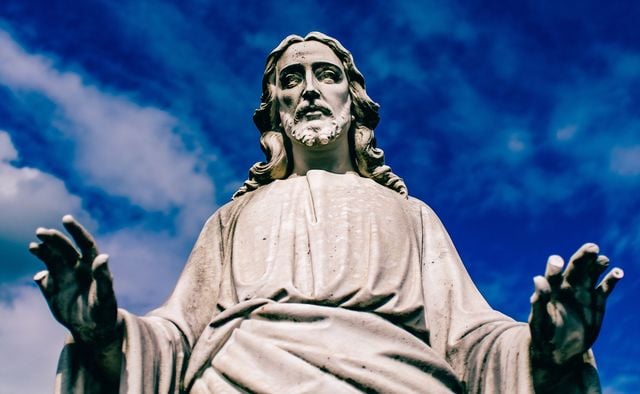 "Jesus Shoes": Do you find these sneakers offensive? Getty

A Brooklyn creative label, who created Nike Air Max sneakers including Holy water, crosses, angels, and a Bible verse, sold out of their controversial design in minutes.

A creative label in Brooklyn, New York released their design for white Nike Air Max 97s sneakers, which include Holy water, sourced from the River Jordan and blessed by a priest, a bible verse (Matthew 14:25), and frankincense-scented soles. The $3k sneakers sold out within minutes, reportedly.

The sneakers were designed by the creative label MSCHF, in Brooklyn, New York. They said they wanted to use the religious shoe design as a way of mocking society's "absurd collaboration culture".

MSCHF's Brand Head of Commerce, Daniel Greenberg, told the New York Post, that the company's staffers were sharing ideas about the ridiculous collaboration ideas. They started wondering "What would a collab with Jesus Christ look like?"

Greenberg referenced a recent collaboration between Adidas and Arizona Iced Tea. He said, "We wanted to make a statement about how absurd collab culture has gotten."

"As a Jew myself, the only thing I knew was that he walked on water," Greenberg added.

Nike has stated that they did not have any input or involvement with the design of the sneakers. MSCHF has made less than 24 pairs of shoe and there are no more plans for a future release. They purchased the sneakers at cost-price and resold them on a resale site.

#hypebeastdrops: Brooklyn-based creative label MSCHF has tapped INRI (Iesus Nazaraeus Rex Iudaeorum) to produce a customized Nike Air Max 97 that evokes the miracle of Jesus walking on water in Matthew 14:25. The pair have been filled with 60cc of water that was originally sourced from the River Jordan and then blessed, meaning wearers are able to, theoretically, walk on Holy Water. MSCHF continues its biblical references with a nod to The Vatican, who is known for their intricate jewels and traditional red shoes. As a result, the customized pair features red insoles that have been scented with Frankenscence in reference to this, and include a steel crucifix on the shoelaces, Matthew 14:25 inscription on the toe box, and an all-round muted water-themed colorway with red accents. Rounding off this Godly pair is a shoebox that features a seal that is modified from the official Papal Seal, and an angel on the box that is excerpted from Albrecht Durer’s 1514 engraving Melencolia I. The pair sold out within a minute on October 8, and can now be bought on the StockX marketplace with prices starting at $2,499 USD — with some pairs demanding a price that’s double, or even nearly eight times more expensive than its original $1,425 USD retail price. Date: Oct 08 Price: $1425 USD Where to buy: stockx.com Photo: STOCKX

The shoes are a revamp of the classic Nike Air Max with holy water filling the transparent air-filled sole with Holy water.  They died the blessed water blue so it would be more visible.

The show also includes a Bible verse - Matthew 14:25 - which refers to Jesus walking on water. The verse reads:

"Shortly before dawn Jesus went out to them, walking on the lake."

This appears in black writing on the top of the shoe, along with a single blood drop, representing the blood of Christ, on the tongue of the sneaker.

They've even threaded a crucifix into the laces and added a red insole to reference the Papal shoes, traditionally worn by the Pope.

As a final touch, the soles of the shoes are scented with frankincense, one of the three gifts presented to Jesus by the three kings after his birth, a reference from the New Testament.

Even the packing on these shoes was religious with an angel and a seal, modeled on that of the Pope.

Unsurprisingly the online community has not reacted well to the "Jesus Shoes" with one Twitter user accusing the company of "worshiping the devil." Another asked if the Indian version would have "Gangajal, Gayatri mantra & Om symbol." They added, "I need my shoes secular."

What do you think? Do you find the sneakers offensive? Let us know in the comments section below.