Jack Schlossberg looks so much like his late uncle John F. Kennedy, Jr. 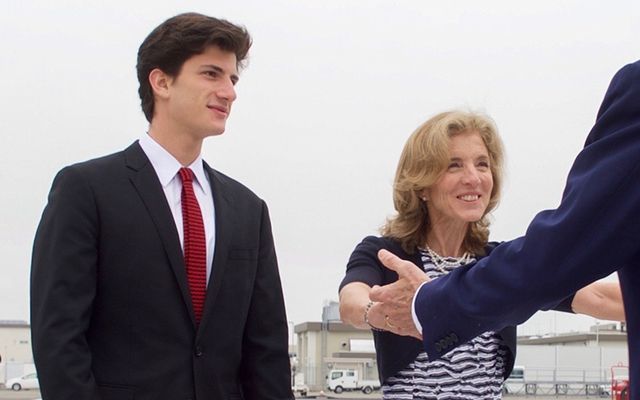 Jack Schlossberg, Caroline Kennedy’s youngest child, and only son, has been attracting attention for his uncanny resemblance to his uncle, the late John F. Kennedy, Jr., who tragically died in a plane crash in 1999.

Schlossberg is already taking after his late uncle in many ways, according to friends and family.

It seems Schlossberg has not only inherited his uncle’s good looks, but also the Kennedy family brains. Schlossberg graduated from Yale University in 2015 with a degree in history and a focus on Japanese history.

People magazine has noted that he spent time in Japan with his mom, Caroline, who was serving as the U.S. Ambassador to Japan at the time.

At Yale, Schlossberg wrote blog posts for The Yale Herald and trained to become a volunteer Emergency Medical Technician. "Jack sees this training as a way to give back to the New Haven community that he's living in, and where there's obviously a lot of issues [such as crime and poverty]," a friend told the New York Post in 2013. "Jack's very aware of all the privileges and opportunities that come with his family, so his EMT training has a lot to do with the community-service aspect."

Speaking of community service, Schlossberg has already founded a non-profit organization. When he was in eighth grade, he found RelightNY, which reportedly "provides compact fluorescent light bulbs to low-income housing developments and promotes environmental awareness."

Following his graduation from Yale, he took the LSATS in November 2016, and in December 2016, he was reportedly studying for the GRE and was in the process of applying to grad schools.

As a member of the Kennedy family, it is no surprise that he is interested in entering the political arena.

In 2013, he served as an intern to Sen. John Kerry and subsequently as a page on the Senate floor. On-campus, he co-founded an organization in support of Sen. Chris Murphy, TheList.com reports. He has also voiced his opinions on a number of issues. He wrote about the Syrian refugee crisis for Time magazine in 2016, and that same year, in Politico, he denounced Republican presidential candidate Sen. Ted Cruz's self-made comparisons to President John F. Kennedy. He also wrote an op-ed in The Washington Post, urging young people to cast their vote for Hillary Clinton in the presidential election.

In 2011, he wrote a letter to The New York Times criticizing an article written about his grandfather, President John F. Kennedy.

However, even though he honors and is proud of his family, he doesn’t let the Kennedy legacy define him.

A friend has noted that Schlossberg is "not walking around with a big sign over his head. He's not spending a lot of time thinking about his family's legacy. It's something he's proud of, but it doesn't define him."

Do you think Jack Schlossberg looks like John F. Kennedy, Jr? Let us know in the comments.