JFK’s only grandson on Obama, life and Caroline Kennedy in government

Those who know the Kennedy family say Jack Schlossberg is one to watch. 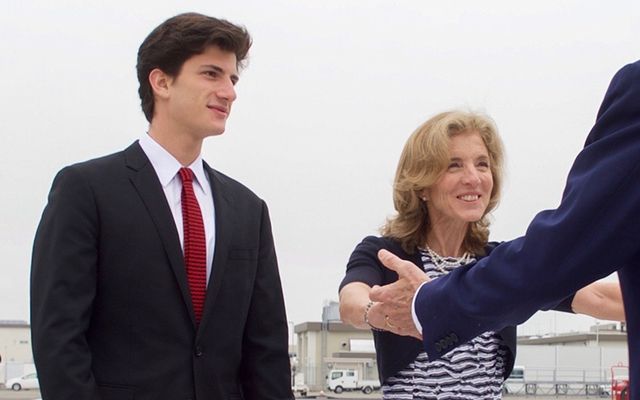 Jack Schlossberg, JFK’s only grandson, has given an insightful interview about his future plans.

Interviewed alongside his mother, Caroline, on NBC’s Today Show the 24-year-old Yale graduate was asked whether he’d ever consider going into the family business of politics and hinted he’d do just that.

“I’m inspired by my family’s legacy of public service. It’s something I’m very proud of. Stay tuned. I don’t know what I’m going to do.”

And he was equally nuanced when asked about his mom’s rumored ambitions: “I will support my mother in anything she does, I love her so much! That’s her decision and I’ll leave it at that.”

Political anoraks in New York gossip that JFK’s daughter, who just finished up a three-year stint as the US Ambassador to Japan, is eyeing up the Senate seat held once held by her uncle, Robert.

When pressed as to whether she’d like her son to run for office Kennedy parroted back, to laughs from the presenters, “I love my son Jack and I will support whatever decision he makes!”

“Would you like to see your mom run for elected office?” @MLauer asks Caroline Kennedy's son, Jack Schlossberg pic.twitter.com/1jOncjY2iO

Despite joking that he graduated Yale, “by the skin of my teeth,” Schlossberg also revealed that has an offer to study at Harvard Law in the fall.

And even if he isn’t going to run for office yet, he’s certainly engaging with his grandfather’s legacy: He sat on the committee that chose this year’s winner of The Profile in Courage Award - named in honor of a book JFK wrote about politicians who defied the prevailing mood of the time to do what was right.

“This award recognizes that he made tough choices over the last eight years to execute on a vision for America, to give people health care, to get serious about climate change, and to reach out to international partners and really improve America’s standing in the world,” he told viewers. “That takes political courage.”

This year’s winner was none other than former President Barack Obama who Schlossberg said has inspired him since he was only in high school.

“In 2008 I was inspired by President Obama’s vision for America and all the promises he laid out for our country. This award really recognizes that he made tough choices over the last eight years to execute that vision; to give people health care, to get serious about climate change and to reach out to our international partners to improve America’s standing in the world.

JFK's grandson, Jack Schlossberg: Around the world the US is a "beacon of opportunity, stability and strength in a world of uncertainty." pic.twitter.com/dSP7Wofalc

“That really takes political courage,” he added before taking a dig at the current incumbent. “I think we’re seeing today that it’s pretty easy to criticize without offering solutions. President Obama did not do that. He had the courage to govern responsibly.”

Schlossberg was born in 1993 and raised on the Upper East Side, one of three kids from his famous mother’s marriage to designer, Edwin Schlossberg.

He’d previously spoken of his admiration for the 44th President in 2012 at the Democratic Convention praising him for, “pushing for the DREAM Act ... coming out in support of gay marriage, an issue that's very important to my generation, or - and the Affordable Care Act ... I think that a lot of people are going to start getting excited now.  We're really starting to kick this off.  And I think you're going to see a lot of young people at the polls.

With his Kennedy family charm and connections, we could very well see young voters flocking to the polls to support him as well.