Caroline Kennedy does not rule out White House bid

The daughter of President JFK, Caroline Kennedy, continues to spark rumors she has plans to run for office in the near future. 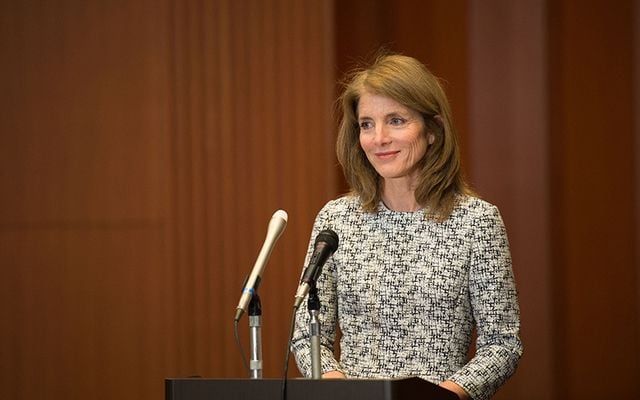 The daughter of President JFK, Caroline Kennedy, continues to spark rumors she has plans to run for office in the near future. WikiCommons

Former US Ambassador to Japan Caroline Kennedy evaded ruling out a run for office as she spoke on Friday morning TV for the first time since her return to the US. Kennedy, the only surviving child of President John F. and Jackie Onassis Kennedy, is rumored to be considering a run on Senate or Congress with an eventual attempt at the White House following her three-year ambassadorship.

Appearing on Today with Matt Lauer, the 59-year-old writer, lawyer, and diplomat, declined to say whether she was considering taking further steps into the world of politics or had her sights set on Capitol Hill.

"It's great to be home. I'm looking to figure what I’ll do next,” she demurred, before jokingly stating, "I think I'd rather be on morning TV" when pressed by Lauer about her political intentions.

Although sources close to Kennedy say she was to concentrate on memoirs on her return to New York, they also hint that the former First Daughter aims to follow in both her uncle’s footsteps in holding a Senate seat in New York ad later her father’s footsteps in taking a place behind the desk in the Oval Office.

Kennedy, who was appointed as the first female US ambassador to Japan by President Obama in 2013, also had harsh words for President Trump’s “America First” inauguration speech and his fiery remarks on Japan while he was the Republican presidential candidate. She continued to state that the foreign policy employed by the 45th President is “alarming”.

"To be taken for granted, or to be insulted as an ally who has fought alongside the United States for example, with Australia, or who contributes a huge amount to American security, in the case of Japan and Korea, is alarming and I think that, hopefully, the president will realize the benefits of working with our friends and allies around the region," Kennedy told Lauer.

Kennedy stepped down from her position in Japan on January 18 after the transition team for President Trump ordered all political appointees to step down by his inauguration day.

She referred to her time in Japan as the “greatest privilege” of her life but was mocked by President Trump while he was on the campaign trail for being too weak with the Japanese government. “She’ll do anything they want, anything!” he claimed.

Trump also called on Japan to begin pulling its weight in protecting itself, stating that the US could not be expected to pay for the costs in the future.

On Friday, Defense Secretary Mattis arrived in Japan as part of his first foreign trip. Hoping to ensure the state that the US was still a strong ally, despite the words of the current president, a move that Kennedy welcomed.

“The region is so critical to our future, so it’s important that the defense secretary went to consult and reassure our allies about our commitment,” she said, defending the amount of money put forward by Japan towards its own defenses.

"They contribute more than 75 percent of the cost of the bases, and it’s in our interest that Japan be strong and that our troops be there. That makes us safer here at home.

“Japan’s own security helps the United States be safer, and it provides a lot of jobs and a lot of economic opportunities for American companies,” she continued referring to Japan as “our number one ally” in the region.

Although many were skeptical about Kennedy’s appointment in Japan due to her lack of substantial government or policy experience, the 59-year-old proved herself to be a highly popular ambassador to Japan.

According to the New York Post, sources close to Kennedy believe you to be in line to take on the mantle from Hillary Clinton within the Democratic Party.

“Caroline had a successful ambassadorial run in Japan and feels really very confident about putting her hat in the ring for a New York congressional or Senate seat, with even possibly bigger political objectives down the road,” a source said.

“Caroline is seen in some quarters as the next Hillary Clinton. She has the Kennedy name but no Clinton baggage.”

Would you like to see another member of the Kennedy family run for office? Let us know in the comments section.