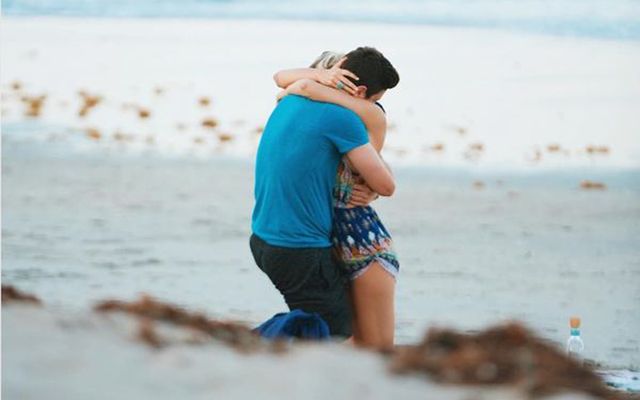 One Co. Galway man has women and men alike swooning over his beautiful marriage proposal, filmed in secret so as not to ruin the surprise.

While simple, Shane McInerney’s proposal to his American girlfriend Julia Gordon will be forever memorable for its sandy location and the incredible reaction from Gordon who was clearly not expecting McInerney to be down on one knee.

Former professional soccer player McInerney moved to the US on a sports scholarship five years ago and met Gordon, a yoga and pilates instructor, while he was working in an Irish bar. In their half a decade together, Gordon has already upped and left her life in Florida to move to Sweden with her boyfriend because of his work.

While McInerney eventually returned to the US to be with Gordon, he also decided that this kind of commitment on her part should be mirrored by his own.

Volunteering to head to the beach with Gordon and film a yoga promotion for her, she sets about her yoga poses only to emerge from one with a ring presented in front of her.

Luckily, McInerney had hired a photographer to capture the special moment as she gets her bearings and it starts to sink in.

"We have both been through so much to be together and make this happen. I finished college in Florida last May and signed a professional soccer contract in Sweden,” McInerney, from Ballinasloe, told Joe.ie.

"My girlfriend Julia left her job and career and moved to Sweden to be with me. Over Christmas, I had options to sign a professional contract with a few clubs but turned them down to return to Florida in order to be with Julia."

We see that Julia has already learned some of the lingo she’ll need to keep up with an Irish husband!

What's the fucking Craic ? Thanks everyone for all the messages much appreciated 💙💍🇮🇪🇺🇸