The Co Meath man has found bones and part of a skull in the garden where his granddaughter plays. 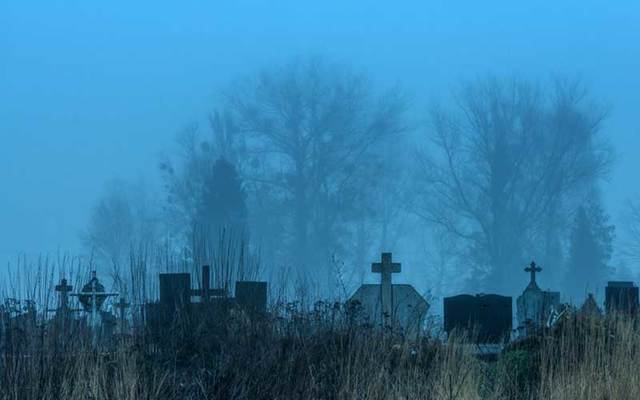 A graveyard at dusk. iStock

A Co Meath man is having a particularly gruesome problem. Corpses from the cemetery next door keep tumbling into his garden.

Frank Taaffe has begged Meath County Council to help rebuild the wall that separates his home from the graveyard in Monknewtown, Slane, Co Meath. The gap in the perimeter is causing, alongside mud and rocks, human remains to fall into his garden, the Irish Mirror reports.

The 63-year-old said he has seen bones and part of a skull lying out in his garden, where his granddaughter, nieces and nephews play.

“The graves will be moving and so we could see more bones and that is the last thing we want.

“So far I’ve just covered the ones we’ve found. You want show them respect in their resting place so I wouldn’t move them myself.

“I’ve had the families of people buried here get in touch and ask if we can do anything about it, but council haven’t done anything.

“An archaeologist came out to see the wall in March but since then I’ve got more answers from talking to the steering wheel of my car.”

Taaffe said the problem first started 20 years ago when rain caused a section of the wall to collapse. He is now concerned another wet Irish winter could see entire graves rolling into his yard.

“It is still a cemetery in use, and it’s a worry because it isn’t a pleasant thing to see you know.

“The last person buried there was in 2015, so it is still a working cemetery.”

As another section of the wall has started to breakdown, Taaffe says he is also concerned for the safety of his granddaughter.

“It looks like it could fall down at any time and it could collapse on top of you.

“That is something that plays on your mind when you’ve got children in a garden.

“You would never forgive yourself if something like that happened.”

It would not take too long to repair the wall if the council would only give its approval, says local councillor Paddy Meade.

He added: “If something isn’t done now the rest of the wall will gradually crumble and fall. But with two men it could be fixed in just a few weeks.

“It’s bad and it shouldn’t be something Mr Taaffe has to deal with., I’ve asked the council many times but nothing’s happened. Something needs to be done.”