Frank’s interest in business appealed to the President, who was delighted to help him out. 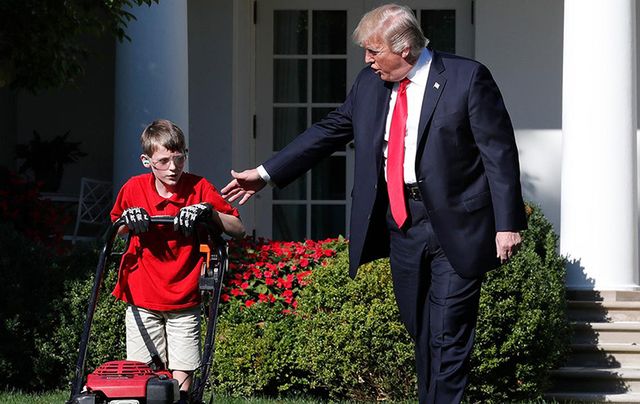 An 11 year old Irish American has said the opportunity to cut the White House’s lawn was “pretty much the best day of my life.”

Frank Giaccio, nicknamed ‘FX,’ from Falls Church, Virginia was on vacation with his family in Ireland when he heard the news that his letter to Donald Trump had made it all the way to the Resolute Desk.

Frank, whose mother is from Dublin, had previously written to President Obama asking to let him cut the grass but received no invite. This spring he tried his luck again, informing President Trump that he was in the business of cutting people’s lawns and he’d be happy to cut his for free.

“Dear Mr. President,” his letter began. “It would be my honor to mow the White House lawn some weekend for you. Even though I’m only ten, I would like to show the nation what young people like me are ready for. I admire your business background and have started my own business. I have been mowing my neighbors’ lawns for some time. Please see the attached flier. Here’s a list of what I have and you are free to pick whatever you want: power mower, push mower, and weed whacker. I can bring extra fuel for the power mower and charged batteries for the weed whacker. I will do this at no charge.”

Press Secretary Sarah Huckabee Sanders told the White House press corps that the groundskeeper, “would love to give you [Frank] the opportunity to cut the grass in the Rose Garden.

"It's our responsibility to keep the American Dream alive for kids like Frank, immigrants who are already here and those who dream of immigrating here in the future."

But Frank only expected to cut the grass, not actually meet the President.

“I thought he was just going to his office,” he told RTÉ News.

“And then he turned early.”

Mid-way through Frank’s cutting of the grass Trump told the assembled mass of journalists and photographers, “This is Frank, he’s going to be very famous.

Frank “FX” Giaccio-
On behalf of @FLOTUS Melania & myself, THANK YOU for doing a GREAT job this morning! @NatlParkService gives you an A+! pic.twitter.com/135DxuapUI

Afterwards FX and his Dad were even invited into the Oval Office for a series of pictures with the President and Vice President by the Resolute Desk.

“I think I’m on YouTube, people were tweeting me all the time. Just crazy.”

Crucially, however, it’s been unequivocally good for his business.

“It gave me a major hit, I think. I’m planning on growing my business, going into different subjects, like babysitting, etc.”

Read more: Top ten reasons the Irish make a success of themselves as immigrants

In the meantime, there’s still plenty of Virginia lawns to be mowed before winter comes.