In a speech criticizing planning board An Bord Pleanála, Independent TD Mattie McGrath launched into a nonsensical aside about "dirty linen", stating that he wasn't sure what capsules people put in washing machines anymore. 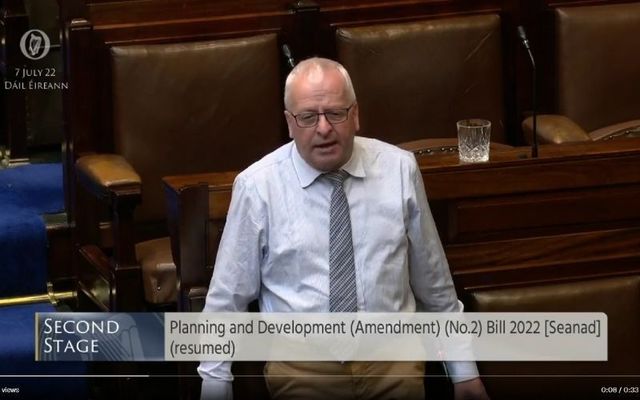 Irish politician Mattie McGrath has gone viral after going on a nonsensical tangent about washing machine tablets in the Dáil on Friday.

In a speech criticizing planning board An Bord Pleanála, McGrath launched into an aside about "dirty linen", stating that he wasn't sure what capsules people put in washing machines anymore.

The Independent Tipperary TD said he was "not up to speed" with the various detergents used nowadays and became nostalgic about the "Surf or Daz" capsules that were used when he was younger.

The clip, which has been viewed more than 1.3 million times, has provoked a strong reaction on Irish Twitter, with SDLP MLA Colum Eastwood humorously remarking that the "embarrassing" scenes at Westminster during the week paled in comparison to McGrath's speech.

McGrath began his speech by claiming that An Bord Pleanála was "not fit for purpose" before launching into a nonsensical tangent about dirty linen and detergent.

"Bord Pleanála is not fit for purpose. There’s too much political influences," he told the Dáil.

"It’s not transparent and we’ll see when all the dirty linen is washed, we’ll see when the clothes are hanging out on the line on a good summer’s day like today they’d be fairly well stained and needing the washing machine and Daz or whatever they call it, or whatever word they use now I don’t know, they’re gone away from Daz.

"I’m not saying I’m a bad homemaker and don’t do the washing but I’m not up to speed on the capsules that go in, the type of them that go into the washing machine.

"It used to be Surf or Daz when I was a duine óg (young person) and the Ceann Comhairle will remember that as well."

I am absolutely howling. Bless the Dáil pic.twitter.com/DjZmbYQN2L

McGrath made the remarks during a debate on the Planning and Development (Amendment) No.2 Bill 2022, which seeks to streamline the application process in Ireland.

It is the second amendment to the Planning and Development Act 2000 in two years.

McGrath's remarks have become a source of amusement for viewers in Ireland and abroad, with one US Twitter user claiming that they didn't understand a word "except for the few times when 'washing machine' came out".

"Bless and save us this chap is speaking double Dutch," another Twitter user remarked.