Aer Lingus flew five Irish emigrants home to Ireland for Christmas, and we still get misty-eyed thinking about it. 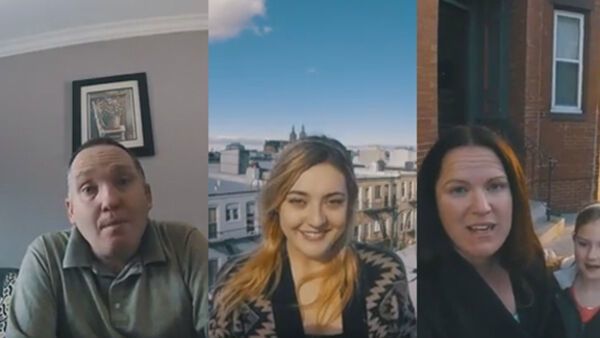 Niamh Callanan had been been living abroad over 13 years without ever going back home. Until this moment, her daughter Saoirse had never visited Ireland before. Aer Lingus

Aer Lingus flew five Irish emigrants home to Ireland for Christmas in 2015, and we still get misty-eyed thinking about it.

For Tomás Crowe, Fintan Hanley, Niamh Farrelly, Claire Kenefick, Nigel McGrath and mother, and daughter Niamh and Saoirse Callanan, going home to Ireland was just not on the cards the previous Christmas, but 2015 was different.

Tomás was going to be the only one of his siblings not home for Christmas. Niamh had never been home to Ireland since immigrating to the US over 10 years ago, and her daughter had never even seen her home country. Fintan was devastated that he wouldn’t be able to spend Christmas with his nephew, who is awaiting a lung transplant.

This is where Aer Lingus, the Irish airline that’s been flying people home for the holidays since 1936, decided to step in.

They asked Irish emigrants to submit their compelling stories on why they would love to spend Christmas at home in Ireland and then gifted five lucky travelers with return flights.

The film is unique as it was made without a professional crew but by the winners themselves. Each winner was equipped with camera equipment, flights and a chance to tell their story.

Learn a bit more about each of them before you watch their joyful, tearful reunions:

Nigel lives in Chicago but is originally from Monaghan. He came to America in 1994. He was home in July the previous year, in memory of his dad’s first anniversary. Nigel wanted to spend Christmas with his mother as this would be her first Christmas at home since his father passed away. Nigel flew home with his wife Kathleen and sons Peader and Liam.

Niamh, originally from Galway, lives in Boston with her nine-year-old daughter Saoirse. She has been living abroad over 13 years without ever going back home. Until now her daughter Saoirse had never visited Ireland before and hasn’t seen her grandad since she was just two months old. Niamh was desperate to surprise her parents, siblings, and nieces. Her mother just celebrated her 60th birthday so this surprise was the icing on the cake.

Fintan is from Monaghan originally but has been living in America for over ten years. He lives halfway between New York and Boston. Fintan was home earlier in 2015 to see his 22-year-old nephew. It was Fintan’s dream to spend this Christmas together as his nephew was waiting on a lung transplant.

Clare lives in Brooklyn, New York but is from Douglas, Cork. She really wanted to surprise her mum and dad with whom she is extremely close. She works long hours and doesn’t really get to talk to them as much as she wishes she could. Christmas is such an important for her and her family and until she won her flights she wasn’t looking forward to spending Christmas apart. Clare is thrilled to be back home in Cork with her family this festive season.

Tomás is 28 and comes from Galway but is now living in New York. He has three sisters and two brothers. His sister recently traveled home from Australia for Christmas and before Tomás won his flights he was going to be the only member of the family not at home in Galway. This has been the best ever-present as he can now spend Christmas with his sister and all his family.

This is perhaps the most touching reunion video we’ve seen this holiday season, so make sure you have a few tissues on hand before watching:

Have you ever made a surprise visit for Christmas? Let us know in the comments!