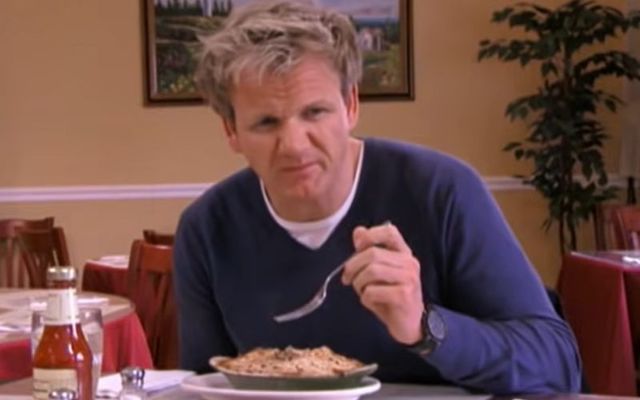 Celebrity chef Gordon Ramsay was once so repulsed by a New York Irish bar's Shepherd's Pie that he ended up throwing up in the establishment's bathroom during an early episode of "Kitchen Nightmares".

The episode, which aired during the first season of the culinary reality show in 2007, saw Ramsay visit Finn McCool's Irish pub in Westhampton, New York.

As with almost all episodes of the popular series, Ramsay travels to a struggling restaurant in a bid to turn its fortunes around, sampling items off the menu in an attempt to pinpoint where everything has gone wrong.

In this case, Ramsay orders "Irish spring rolls" consisting of corned beef and cabbage, which Ramsay later describes as "very strange, bizarre-looking," as well as salmon, which he was none too impressed to see was drowned in balsamic vinegar.

However, Ramsay's final selection put the nail in the coffin - an American take on the classic Irish comfort dish Shepherd's Pie.

Ramsay described the dish as a "big ball of grease" and begins to cough and splutter after just a few mouthfuls.

The world-famous chef then promptly rises to his feet and asks staff for directions to the bathroom before the sounds of him throwing up can be heard on camera.

Ramsay later confronts Brian over his lamentable cooking, telling him: "Clearly, we've got issues. When a chef can't make a f------ Shepherd's Pie, it worries me."

However, Brian claims that "my Shepherd's Pie was taught to me by somebody who learned it from somebody who went to Ireland. Ya know, it's an American - Irish pie."

Ramsay tries his best to turn the restaurant's fortunes around, organizing a facelift for the establishment to remove its netted curtains and liven it the place up a bit.

However, Ramsay's efforts were not enough to save Finn McCool's. Buddy Mazzio reportedly sold the establishment in 2009 before it closed its doors for good in 2012.