"Gobshite" was printed in The New York Times for the first time ever when it was included in an excerpt from Irish novelist Roddy Doyle's latest work "Love." 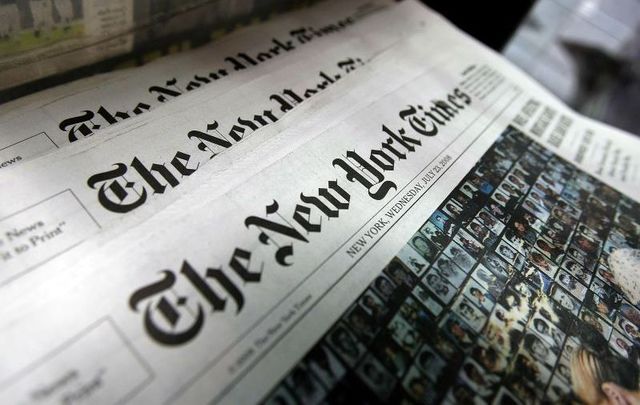 "Gobshite" has been printed in The New York Times for the first time ever. Getty Images

Irish people took great delight in the debut of "gobshite" in the New York Times.

“Gobshite” was printed in The New York Times for the first time ever in June 2020 when it was included in an excerpt from Irish writer Roddy Doyle’s new novel “Love.”

The Irish term "gobshite" appeared in this line: “I got to meet the maths teacher, he said. —A gobshite, by the way. But I was outside his door. I just happened to be there.”

The Twitter account New New York Times (@NYT_first_said), which claims to “tweet words when they appear in the New York Times for the first time,” shared the news on June 23:

The tweet has since been liked more than 9 thousand times, far and away the account’s most-liked tweet this month.

Max Bittker, the creator of @NYT_first_said, does note, however: “An important thing to understand about @nyt-first-said is that the process to extract these words is a best effort undertaking, and not necessarily 100.00% accurate or exhaustive.”

A separate Twitter account, NYT Bibliography (@NYT_finally), which shares “the publishing history of words before the NYT uses them,” noted that while “gobshite” may only be appearing in the New York Times for the first time, it has been printed plenty of times elsewhere:

What is a gobshite, you ask? It's an Irish slang word that is used to describe "a mean and contemptible person, especially a braggart," or "a stupid and incompetent person."

The “gobshite” tweet from @NYT_first_said was met with plenty of humorous replies:

In everyday use here in Ireland.

Marvellous, right up there with Shitehawk

So proud to  be from this stunning Country of Saints. Scholars & Gobshites

The  local ejit knows them all

What a day for Ireland! The word ‘Gobshite’ has made its debut in the New York Times. ‘Geebag’ must surely be next. https://t.co/b7rMgmU6TA

Jarlath Regan shared his stand-up bit explaining what exactly a “gobshite” is:

Today was the first day The New York Times used the word “Gobshite”. The time has come for us all to recognise and discuss the subtle differences between an eejit and a gobshite. pic.twitter.com/leJhDkEQ4Q

And lots of people were quick to reference this scene from Father Ted: