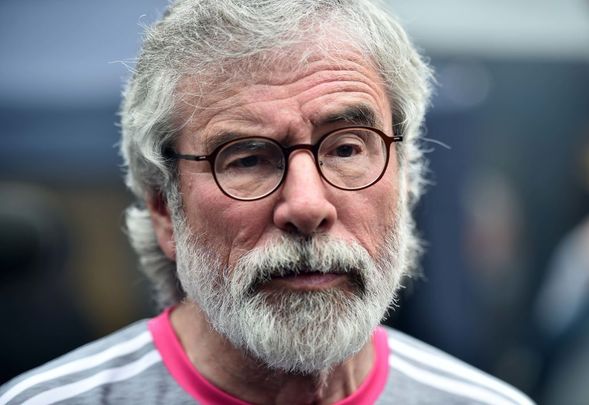 Gerry Adams served as Sinn Féin President from 1983 until 2018. Getty

Adams took to Twitter on March 20 to unveil the special-edition egg - a chocolate egg wrapped in a sheet of paper that says #time4unity.

Adams humorously said that the eggs were part of a "very, very, very special package that we have put together at considerable expense."

He confirmed that there is a limited supply of the eggs due to the COVID-19 pandemic and said that they will only be available in Belfast.

Adams and his press secretary Richard McAuley have previously launched United Ireland Valentine's Day and St. Patrick's Day cards and have now launched the #time4unity Easter eggs, which include a Proclamation of Independence and an Easter lily.

"While we honor our patriot dead, and it’s very, very important that we do so and we remember the sacrifices of all of those generations, and particularly the men and women of our own time and also the men and women of 1916 … Easter is also about Easter eggs," Adams said in the two-minute video posted on Twitter.

Sadly because of Covid restrictions there is a limited supply and they are only available in Belfast.

So, if you want one contact your local Sinn Féin rep quickly. pic.twitter.com/H7kZwPag2X

The former Sinn Féin President said that there was no better way to unite Ireland than with United Ireland Easter eggs and humorously quipped that "even the Unionists like Easter eggs."

He said that the Easter egg was a "cross-community, all Ireland, all-island Easter egg" since it is made with milk from the Boyne Valley.

WATCH: Irish bride and groom brought to tears by surprise "Stand By Me" performance

A funny Irish saying to ward off your enemies