See how an old cowboy show, Simpsons, other shows all predicted Donald Trump

From as far back at the 1950s, a Trump presidency and everything that comes with it has been predicted. 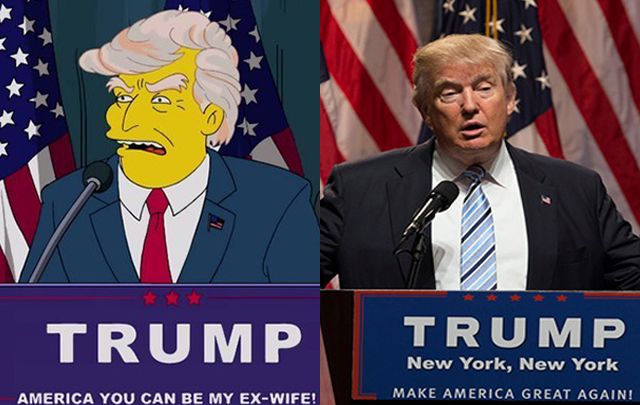 From as far back at the 1950s, a Trump presidency and everything that comes with it has been predicted. YouTube / WikiCommons

The opinion polls, journalists, and political pundits may not have seen it coming, but Hollywood certainly did. Starting in the 1950s Hollywood – through both movies and television shows – provided us a few eerie omens about the 2016 Presidential election and real-estate mogul Donald J. Trump.

As the President-elect prepares for tomorrow when he will become the 45th President of the United States amid much controversy and a divided nation, we look back at all the signs we missed from some classic movies and TV shows that predicted this very outcome.

1. The “high priest of fraud” visits “Trackdown” with plans to build a wall

In a 1958 episode of TV Western “Trackdown,” a man named Mr. Trump visits the town informing its residents that the only way to save themselves from the end of the world is to build a wall.

While some regard him as a “high priest of fraud” looking for the town’s money, others are described as “sheep running toward the slaughterhouse” in their adoration of this savior who will protect them from a deadly meteor shower.

“It’s funny how a big lie can make us all kids again,” in particular seems like a fitting line in this the era where Trump’s Twitter squabbles and fake news are discussed daily.

This fictitious salesman is not quite as successful as our real-life version, however, and he ends his time in the town hearing the words half the current US population would love to hear sometime soon: “You’re under arrest Trump.”

Parallels are now being drawn between Roberts and Trump (although the shots of Roberts’s harmonica playing do remind us of Senator Tim Kaine), as Roberts appears at a beauty pageant and he also insults a reporter by asking her if she is a Communist.

“America is a mess. We need someone to clean it up,” says this wealthy man with political aspirations, as he performs the “Wall Street Rap” and informs people that he is the man with the solution.

3. Andy Griffith plays a TV man who gets caught on a hot mic

In this 1972 interview with Morning Exchange, Andy Griffith speaks about his character Lonesome Rhodes in the film "A Face In The Crowd."  The actor describes Rhodes as a TV personality who realizes how much influence he has over the public and, so, he decides to chance his arm in politics, a description that we also readily give to the President-elect.

“He became accepted by people and he became their hero and then he started to manipulate them and tell them how to think and they would do what he said to do,” Griffith said.

“Then he began to realize how much power he really had and he started to influence the politicians.”

Making use of punchy catchphrases and plenty of glamor, the politicians Rhodes supports climb their way to the top with his aid. “You’ve gotta be loved, man, loved,” they say of the “product” of a politician, in the clip below that could itself be talking about the conflict between Trump, Clinton, and their campaigning styles.

And how was Rhodes caught out? Well, a sound engineer left his mic open at the end of the show and heard him using derogatory language about his fans – locker room-style – who then decide they've had enough of him. Our own Donald Trump managed to survive his brush with a hot mic, however.

4. Lisa Simpson takes over from President Trump in “Bart To The Future”

In an episode of hit comedy "The Simpsons" that first aired in 2000, viewers were taken into the future where Lisa Simpson is now all grown up and now serving as the new President of the United States.

Unfortunately for Lisa, she’s inherited a country in massive debt and financially unstable thanks to the reign of President Trump, from whom she’s is taking over.

“As you know we’ve inherited quite a budget crunch from President Trump,” Lisa states. “How bad is it Secretary Van Houten?”

Speaking to the Hollywood Reporter in March 2016, "The Simpsons" writer Dan Greaney stated that the episode had been a “warning to America.”

“And that just seemed like the logical last stop before hitting bottom. It was pitched because it was consistent with the vision of America going insane,” he said.

“What we needed was for Lisa to have problems that were beyond her fixing, that everything went as bad as it possibly could, and that’s why we had Trump be president before her.”

If the hit TV show’s predictions are completely true, however, then we’re looking at just one more President before a woman will take to the Oval Office, some solace for those disappointed in Clinton’s loss.

5. Biff Tanner in Back to the Future 2

Hotels with his name branded on top for all to see? A string of casinos, a strange blond hair style, a line of attractive women who seem unsuited to him? Three marriages? It’s hard to differentiate between the president-elect and the fictional character of Biff Tanner in "Back to the Future 2" at times.

Biff cheats and lies his way to the top and turns life, as the main character Marty McFly knows it, upside down, destroying his town in the process. Nice to know that if things start to go drastically wrong in the next four years that only a flux capacitor can save us!

This 1989 second installment of the "Back to the Future" trilogy jumps thirty years into the future to 2015 and, obviously, offered the audience a pretty good glimpse of what was to be. Last year the scriptwriters revealed that Tanner was modeled on the current president-elect.

“We thought about it when we made the movie!” writer Bob Gale told the Daily Beast.

“You watch Part II again and there’s a scene where Marty confronts Biff in his office and there’s a huge portrait of Biff on the wall behind Biff, and there’s one moment where Biff kind of stands up and he takes exactly the same pose as the portrait? Yeah.”

As we know, Trump was accused of using money from his charity foundation to buy a self-portrait so the resemblance really is uncanny.

Have we missed any? Let us known in the comments section, below.