Donie O'Sullivan's viral interaction with a MAGA supporter in Ohio has been made into t-shirts in Ireland to benefit the charity Muslim Sisters of Eire. 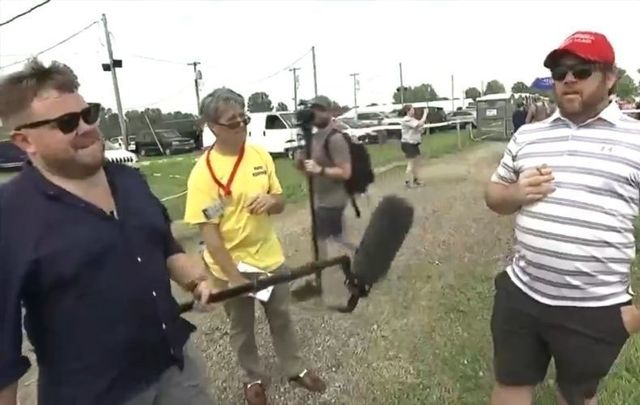 CNN's Irish correspondent Donie O'Sullivan got an unexpected reaction when he asked a Trump supporter what his name is. @Donie, Twitter

Donie O'Sullivan, CNN'S resident Irish correspondent, probably had a hunch that his interaction with a MAGA man at a recent Trump rally in Ohio would probably go viral, but it's unlikely he could have foreseen the exchange being turned into a T-shirt for charity in his native Ireland.

“Right. And are you from Ohio?” the unflappable O’Sullivan continues.

On June 27, O’Sullivan shared a clip of the interaction on his Twitter account that has since gone on to be viewed more than 2.3 million times and liked more than 47.2k times:

It’s the friends we meet along the way… pic.twitter.com/jCbziIeX6k

Amongst the viewers of O’Sullivan’s viral tweet was fellow Irish man Adrian Barry, who seized the opportunity to make the bizarre exchange into a charitable exercise.

Barry, who is based in Ireland, has released t-shirts depicting O’Sullivan’s interaction with Mr. Go F*** Yourself. Sales of the t-shirts will benefit the Irish charity Muslim Sisters of Eire.

Inspired by @Donie’s moment of magic in Ohio on Monday, I’ve designed a t-shirt, they’re available for order with all profits going to charity. 👕 pic.twitter.com/3aAYkFpMHv

Barry tells IrishCentral: “Like millions of others, I watched Donie's chat with the charming Trump supporter in Ohio.

“What floored me was Donie's unflinching response. I've worked in broadcasting for 20+ years and there are very few people who would've had the composure and wit to deadpan the MAGA man's passively furious response to a very simple question."

Barry says he's impressed with O'Sullivan's reaction, saying it "cut the rug under his interviewee in an instant" and that it's "a very small insight into why this guy is operating at the top of his game for one of the highest-profile news outlets on the planet."

Indeed, CNN correspondent O'Sullivan, a native of Cahersiveen in Co Kerry who is now based in New York City, has become a household name in the US, Ireland, and further afield for his dedicated reporting on technology and politics. The Irish man received a great response for his live reports from the January 6 unrest in Washington, DC.

For his charitable t-shirt design, Barry says his initial focus was Donie's "powerful" follow-up question. "I thought it would make a great t-shirt slogan so I feel bad that it's been relegated to the back of the shirt! But it's a powerful punchline for anyone who's seen the clip so I guess that's ok.

Barry continues: “The silhouette of MAGA man really captures the essence of his passive fury, casually holding and pulling on his cigarette he actually reminded me a lot of John Goodman's character in ‘The Big Lebowski’ - ready to fly off the handle with at any moment and for any reason. And like Walter Sobchak, he probably has loads of redeeming factors too, maybe he'll do a follow-up feature interview with Jimmy Kimmel where he'll reveal his true nature as a sweet family man who works with the underprivileged at the weekend."

Barry said that once he had the T-shirt design ready, he reached out to O'Sullivan on Twitter "to give him a heads up" and that he planned to sell some for charity.

"He thought it was great so away I went," Barry says.

“The shares and responses from Ireland and the US have blown us away, people seem to love it. Now we just need to sell some more."

Barry says he chose to donate proceeds to Muslim Sisters of Eire since “there are loads of well-established and many well-funded charities in Ireland so I wanted to make an impact with a charity who could do with the few quid we might make and that's how that came about.”

If you’re interested in purchasing one of Barry’s ingenious t-shirts, you can email him at ABConcocts [at] gmail.com. Barry says he can ship to the US and does deals for bulk orders.