In a brave and emotional interview, Donie O'Sullivan revealed his decade-long battle with anxiety and depression. 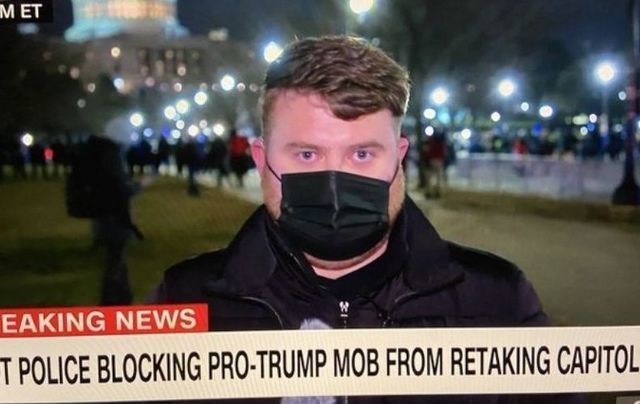 O'Sullivan, who rose to prominence for his on-the-ground reportage during the Capitol riots last month, told the Irish Times that the battles inside his mind are "far more terrifying" than anything he witnessed when enraged Donald Trump supporters stormed the Capitol Building.

"I would say that the chaos that I have had in the past in my mind is far more terrifying than anything I have encountered, even at the riot that day at the Capitol," he told Simon Carswell of the Irish Times.

The 29-year-old CNN reporter said that he wanted to talk about his own mental health experiences while he had "15 minutes of fame" in the hope that it would help even one person. He noted that young men around his age rarely seek help for mental health problems and never speak about their issues.

"I want to send the message that you can do this stuff but you need to get help. A lot of guys at home don’t get help. They live on with it, in torture. I don’t know how they could do that because it is just not worth it. There is help out there. There really is," he said.

O'Sullivan said that he first became aware of anxiety when he was studying for a master's degree in politics at Queen's University Belfast in 2012 while working for a committee at the Northern Ireland Assembly in Stormont.

Then just 21 years of age, O'Sullivan said that he thought he was having heart palpations at first.

"I thought I was having a heart attack in bed one Sunday night," O'Sullivan told Carswell.

"I can’t remember when the penny dropped, but this was anxiety, and it then quickly developed into the anxiety being so bad. I was getting all of these sort of racing thoughts and panicking, every moment of the day almost."

O'Sullivan battled through his mental anguish to complete his first semester at Queen's before returning home to Kerry for Christmas.

There he opened up to his mother and father and agreed to seek help. He began seeing a counselor when he returned to Belfast in early 2013 but said he was initially reluctant to try antidepressants as he believed he would be living in a "fog".

The anxiety attacked had not abated by Easter, however, and his doctor convinced him to try antidepressants. Unfortunately, they did not help.

O'Sullivan said that he had a severe panic attack on a summer evening in Dublin in 2013 that left him crying on the floor of his bedroom. The now-famous CNN reporter believed that he was going to be institutionalized and described his struggles as "agony".

However, he said that his condition never reached a point where he considered taking his own life.

"I never attempted suicide. I never had the moment where I was walking down to a bridge or something. But I had so many moments where that seemed like the more appealing thing to do."

In January 2014, he landed an internship with video-checking news site Storyful and his career skyrocketed from there.

A US citizen through his mother, O'Sullivan moved to the US with Storyful at the end of 2015 and picked up a job verifying videos at CNN six months later.

He said that his battle with depression and anxiety has been "very hard" and urged people to get help rather than hide their issues.

He believes that therapy has made him a better journalist and said that he has continued to go to therapy virtually during the COVID-19 lockdown. He continues to see his therapist even when he is feeling good to "build up an arsenal of weapons" in case something goes wrong in the future.