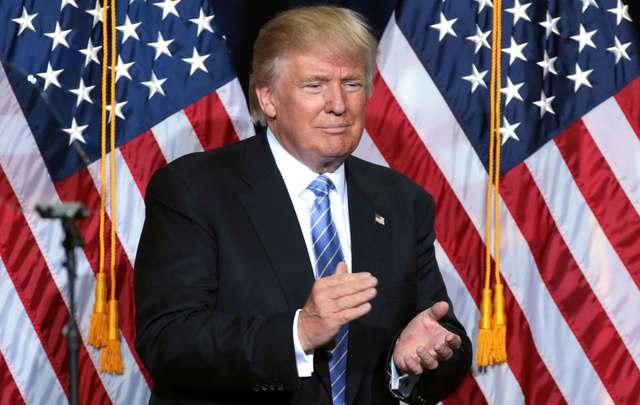 Is there a depiction of President Donald Trump in the Irish Senate? WikiCommons

A President Donald Trump look-alike has appeared in the most unlikely of places.

A Donald Trump look-alike cropped up in the Irish Senate this week but rather than a tango-tanned, square suit-sporting, life-size version of the main man, Irish senators Aodhán Ó Ríordáin and Billy Lawless questioned whether one of the cherub-like figures shown in the artwork around the Seanad (Irish Senate) chamber could have been a depiction of the current US President.

We're in new Seanad chamber. @SenBillyLawless has asked if this is a depiction of @realDonaldTrump: pic.twitter.com/Z4dGvhYQWM

We can certainly see a likeness with the straw-colored hair swept over to the side but we must say we’re glad that we’ve never seen 45 in this state of undress!

Some people on Twitter have disagreed about the comparison, however, claiming that the hands are just a little too large to be any kind of accurate likeness to our 45th President.

Hands are way too big

I don’t think it is a depiction @realDonaldTrump the hands are too big !

While others think that the hair completely nails it:

Oh that hair is dead on #LiarInChief 🤣

This is far from the first time that a likeness of Donald Trump has cropped up in Dublin with several channeling their disapproval of the president into their artwork in several pieces around the capital city.

Read more: What the Irish really think of Donald Trump as president

The Donald Trump urinal in the Adelphi in Dublin.

During the Presidential election campaigns, The Adelphi on Dublin's Abbey Street strategically placed a portrait of Donald Trump at their urinals hoping to offer users the opportunity to show off exactly how they felt about the then-Republican candidate.

"I just felt that it was a way for some people to express their feelings towards Mr. Trump's views and to make their trip to the bathroom a 'wee' bit more entertaining,” manager of the bar Tony McCabe explained.

Other graffiti depicting the president in a less than flattering lights has also appeared on the city’s streets.

Neither of these Irish senators is any stranger to criticism of President Trump. Irish American Senator Lawless is, in fact, commonly known as the emigrant Irish Senator finding himself with a long commute to the Seanad from his base in Chicago. The restaurateur has been a champion of the undocumented Irish in the US for many years, having moved to the US when his daughter was offered a scholarship to attend Amherst.

“We are very scared of his policies in the United States. Some of the rhetoric is just unbelievable,” Lawless said before Trump’s election.

Next March, Galway-born Lawless will be involved in a Chicago-based event linked to Irish Stand, a grassroots movement devoted to civil rights protection for all immigrants that grew from a speech given by his colleague Senator Aodhán Ó Ríordáin on the election of Trump.

Ó Riordáin’s Seanad speech calling on the Irish in America to remember their immigrant roots quickly went viral seeing him featured across US media and culminating in an Irish Stand rally in New York on St Patrick’s Day, 2017, attended by over 1,500 people.

What do you reckon of the likeness? Is Donald Trump cherub-like or is it nothing like him? Let us know your thoughts in the comments section, below.