Co Cork's own Emma Sophia looks set to have another viral hit on her hands with her rendition of "I'll Tell Me Ma." 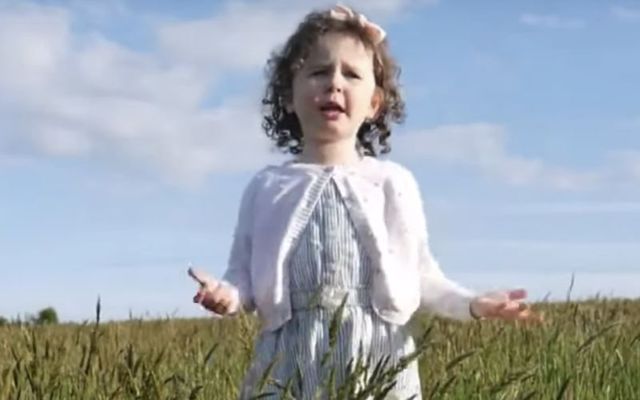 Back in March, Emma Sophia went viral with her version of the Irish ballad "Danny Boy", and now she's back with a wonderful rendition of the 19th-century children's song "I'll Tell Me Ma".

Since the lockdown back in 2020, Irish girl Emma Sophia has become quite an online celebrity hosting her own YouTube show and posting videos to social media. It's clear the public is loving this Kinsale, Cork girl's talents.

Last month, her "Danny Boy" video was released as a single with proceeds go to LauraLynn, Ireland's Children's Hospice.

Emma Sophia's "I'll Tell Me Ma" video was recorded when she was three in the beautiful country of her hometown of Kinsale, in Cork.

Who is Emma Sophie?

Emma Sophia has been singing since before she could talk! And not just nursery rhymes or princess songs (although of course, she loves Disney too). Unusual for a child of her age, Emma Sophia has amassed an extensive repertoire of Irish folk songs and ballads. Emma Sophia first came to prominence when, at the age of just three, her video of Ireland's Call went viral.

Her music videos have been shared extensively across the globe and have been viewed millions of times across social media platforms.

History of "I’ll Tell Me Ma"

"I'll Tell Me Ma",  which is also sometimes called "The Wind" is a well-known children's song that can be traced to various parts of the English in the 19th century.

In Ireland, the chorus of "I’ll Tell Me Ma" refers to Belfast city and is known colloquially as "The Belle of Belfast City", however it is also adapted to other Irish cities, such as Dublin.

"I’ll Tell Me Ma" was usually accompanied by a children's game. Children formed a ring by joining hands. One player stands in the center and when asked "Please tell me who they be," the girl in the middle gives the name or initials of a boy in the ring (or vice versa). The ring then sings the rest of the words, and the boy who was named goes into the center.

In more modern times numerous articles have covered the song including Van Morrison and The Chieftains from their 1988 album, Irish Heartbeat. There was even a dance version, also back in 1988, with Sham Rock's one-hit-wonder.

Here are the lyrics to I'll Tell Me Ma so you can sing along:

Let the wind and the rain and the hail blow high
the snow come tumblin' from the sky
she's as fine as apple pie
she'll get own own love by and by
when she gets a lad of her own
she won't tell her mom when she comes home
let them all come as you will
it's Albert Mooney she loves still CHORUS.