A COVID 2020 poem - A Dublin night before Christmas

"‘Twas the night before Christmas, on the banks of the Liffey, with Christmas lights twinkling all over the city." 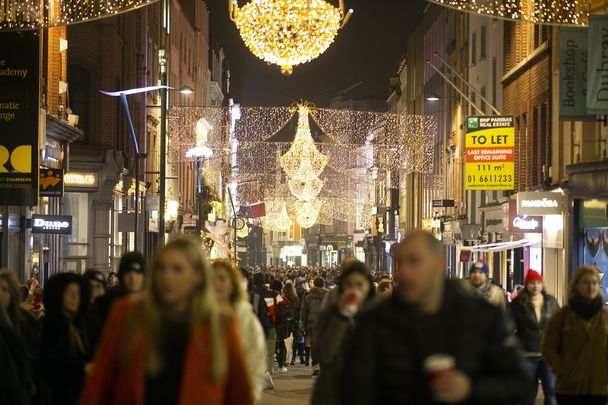 Christmas is always a special time for Irish families, no matter what corner of the globe they live in. It also marks the time when the diaspora makes the traditional trip home to be with their loved ones.

Yet, this year will be different. Hugs and kisses will be replaced by zooms and phone calls.

Christmas is ultimately the hardest time for anyone to be away from home. It is built into our Irish psyche that home is where the heart is at this time of the year and while we will find this Christmas hard and lonely, let us look back on past memories and look forward to the promises of more to come.

‘Twas the night before Christmas, on the banks of the Liffey,
with Christmas lights twinkling all over the city.
Now Santa was coming to visit the Dubs,
With their Guinness and Coddle, it’s a place he well-loved.

Those scattered abroad were longing for home,
While their Mams and their Dads sat watching their phones.
With thoughts of their loved ones in far off distant lands,
‘twas the season of goodwill and they knew all would be grand

He arrived in the city without too much noise,
to deliver the presents for the good girls and boys.
With all of the little ones all snug in their beds,
Their dreams full of hope, as they rested their heads.

He was thrilled to be back in the city he loves,
as he wrapped up all warm with red hat and black gloves.
The snow that was falling was the heaviest this year,
As he navigated a city full of festive good cheer.

The grand bells of Christchurch played their music by night
While the capital city shone with delight
The winding of buses on the cold roads below,
From Northside to Southside all painted in snow.

He soared over Grafton Street, as crowds gathered ‘round
to hear Bono busking, oh what a beautiful sound
And Molly Malone was still wheeling her barrow
In a fair city turned white on streets broad and narrow

The snow kept on falling as he circled the city,
Over Stephen’s Green and a quick stop to Trinity
A quick little glance at the marvel of Kells,
Soon lead him to think that all was not well.

With a long night ahead and 8 hungry reindeer,
The flight across the Atlantic had always struck him with fear.
So a stop down to Moore Street, to re-energize his team
With the prospect of some carrots all juicy and lean.

He flew back over the Spire, feeling a crash, bang and jangle,
And noticed daylight below, where he feet used to dangle.
So he brought the sleigh down by the grand GPO,
And looked to O’Connell, all covered in snow

Now what could he do in the midst of the city,
With a broken old sleigh, not looking too pretty
He climbed under the sleigh with a hammer and nails
And fixed it all up to get out of jail.

The sleigh had been saved and soared through the night
And out past phoenix park all dressed up in white
He waved from above to those awake in the zoo
And stopped by the Aras to greet the President too.

Now back to his task and on in the cold,
“The children are waiting”, to the reindeer he told
With Rudolph still leading the sleigh on its charge,
They passed Patrick Kavanagh who sat watching a barge

The clash of the ash was not to be heard,
as he flew past Croke Park and on up the road
From the Aviva to Croker he was just doing his best
As he battled the snow on his annual test

From Malahide to Foxrock and all over the city,
The wet mushy snow, made the rooftops so gritty.
With Christmas lights and decorations along so many roofs
There proved many a crash landing for 36 little hooves.

But this was the one night that Santa knew best,
With grips on his boots to survive the most slippery test
He filled his big bag with requests the children had sent
And with a wink and a whistle down the chimney he went

He wiped all of the soot off his red velvet suit,
As he carried the bag overflowing with loot
He placed all of the presents right under the tree,
A bike and a book and a Dubs football jersey

He completed his work throughout the rest of the city,
Flew past the Red Cow Inn and down the M50
And I heard him exclaim as he knew everything was right,
“Happy Christmas to all, and to the Dubs a good night.”