Bono and Glen Hansard busk in Dublin on Christmas Eve 2012

Christmas Eve busking on Grafton Street in Dublin is one of our favorite Irish Christmas traditions. This year we celebrate the memories. 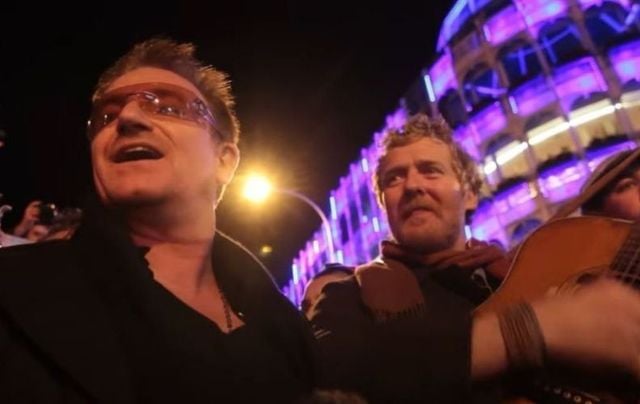 Ordinarily, for the past ten years, if you hang around Grafton St for long enough on Christmas Eve and you may just see Bono busking. While 2020 is different we still have the memories.

For the last 10 years, Grafton Street in Dublin has been taken over by buskers on Christmas Eve for a special Christmas carol singing session. They’re not your run-of-the-mile talented buskers in the capital city, however, but none other than Bono and Glen Hansard rock up on the streets of their hometown to give the locals an impromptu concert.

While it happens in the evening, it’s never really known when and where they’ll turn up but you can guarantee that as soon as they do, you’ll hear about it if you’re in the vicinity, with a large crowd quickly gathering for this opportunity to see some of Ireland’s biggest stars singing some of your favorite Christmas hits.

Below is a video of the busking set from December 24, 2012, to get you in the spirit of things. That year they were even joined by Sinéad O'Connor while Hozier joined in last year's sing-song:

Busking is synonymous with Christmas Eve on Grafton Street, meaning that it will be a very quiet Christmas Eve in the capital this year after Dublin City Council's decision to ban all street performers on health and safety grounds.

With no live music from Bono, Glen Hansard, or anyone else, it is set to be a Christmas Eve unlike any other in 2020, with Dublin's streets less busy than ever before.

Have you ever happened across the Grafton St celebrity busking session? What did you make of it? Let us know in the comments.