How to keep Christmas well with Irish traditions 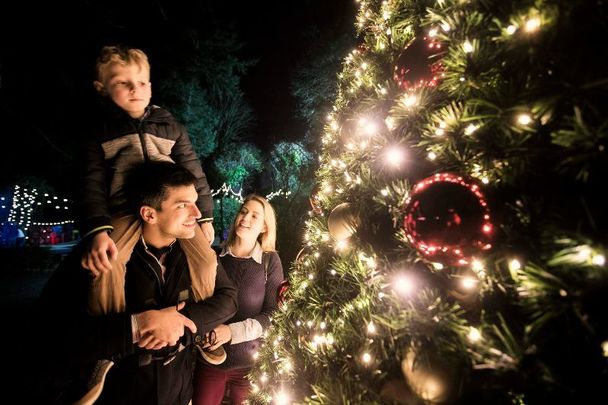 In these often stressful times, it can be difficult to leave your worries behind and have a good time, but if there is ever an ideal time for this then it has to be Christmas.

Sure, didn’t even Ebenezer Scrooge, the original Christmas Grinch, eventually abandon his love of money and embrace the spirit of Christmas? Dickens said of his famous character: “He knew how to keep Christmas well if any man alive possess the knowledge”.

I’d like to remind you of the famous Irish traditions that can help us all keep Christmas well:

The Panto at the Gaiety

Although seen as quintessentially British, pantomime has proven to be continuously popular in Ireland. The first pantomime on these shores was shown in what would become the Gaiety theatre in December 1873—King Turko the Terrible.

Pantomime became as popular in Ireland as it was in Britain. This is reflected in the writings of James Joyce. In Ulysses, Leopold Bloom wanders the streets of Dublin and on occasion, his mind is drawn to images from productions of Turko the Terrible and Sinbad the Sailor that he had seen at the Gaiety.

Now Pantomimes are held not only in major theatres, but in local and school halls across the island, where we laugh at dancing cows, hiss and boo the wicked stepmother and cheer on as Sinbad gets the girl and the gold.

The history of Christmas carols in Ireland goes back to Pagan Winter Solstice celebrations. Revelers singing celebratory songs would usually dance around stone circles. The word carol derived from the French word carole, which was a type of circular procession of dancers and singers. Carol also applies to songs of praise and joy. After Christianity began to rise and spread through Ireland, the older Pagan traditions were superseded by Christian observances. One of the earliest versions of a carol was a song that was titled the Hymn of the Angels or Gloria in Excelsis.

While people rarely go door-to-door anymore, carollers can be heard singing festive songs in towns and main streets across Ireland on Christmas Eve, typically to raise money for charity.

For some families, it’s an annual Christmas Eve tradition to take part in or watch Christmas caroling. 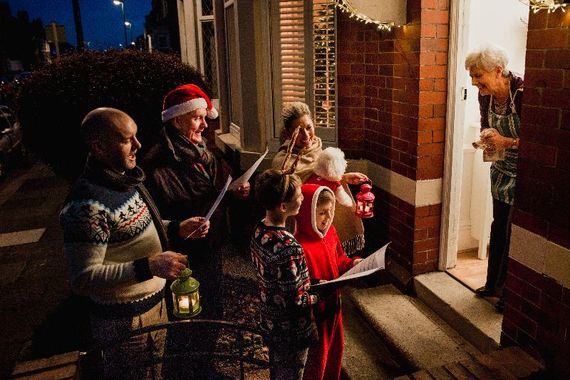 The 12 pubs of Christmas

For the 12 pubs of Christmas, groups visit 12 bars over the course of an evening in an attempt to have a drink in each one. These pub crawls also come with their own rules and dares, which usually involve good-natured high jinks which some regret in the morning after!

The candle in the window on Christmas eve

Every Christmas Eve, many Irish homes place a single red candle in the window. My mother always told me we were lighting the way for Mary and Joseph on their way to find the stable in Bethlehem.

Our family candle lighting ritual signaled Christmas had finally arrived and the wait of Advent was over.

A candle in the window is a wonderful symbol of hospitality, a trait for which the Irish are renowned the world over.

But these Irish candles burning in the windows were not simply a beacon of hope for the Holy Family. They were also a sign of welcome for anyone, friend or stranger, who might be passing by on Christmas Eve.

The sight of a candle in a window from a distance acted as a sign of friendship and welcome to any passer-by who wished to visit. 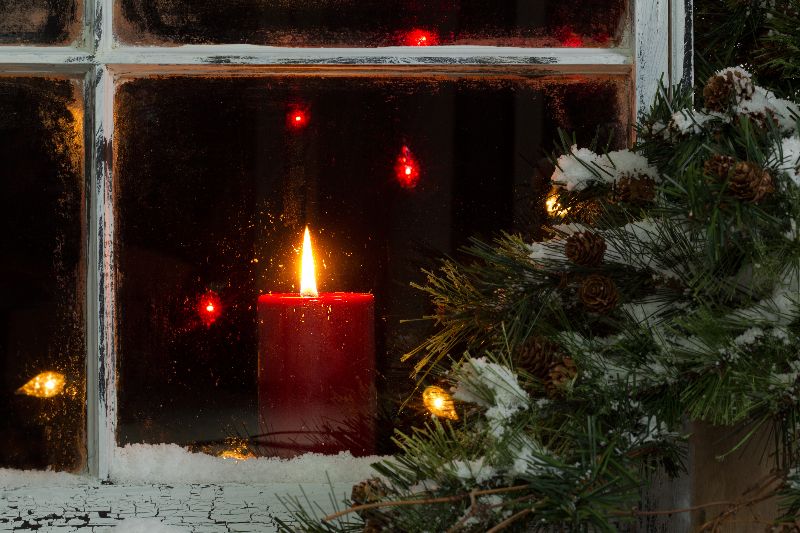 A candle in the window at Christmas. (Getty Images)

Whether they are religious or not, a key Christmas Eve tradition for many families is attending the Midnight Mass at their local Chapel. It’s a huge social gathering where families, friends, and neighbours who you may not have seen all year come together and celebrate Christmas. Now many services start at 10 pm well before the pubs shut for obvious reasons!

Christmas is all about children and before they go to bed waiting for Santa, or as he is known here in Ireland Daidí na Nollag, it is time to leave out the cookies, milk, or something stronger for Santa and his reindeer.

One tradition that many of us have fond memories of is making and eating the Christmas cake.

Christmas cake actually started life as plum porridge, designed to line people’s stomachs after a day of religious fasting. Soon, other fruits and a dash of honey joined the plums and became the good old Christmas pudding.

Around the 16th century, people began to use richer ingredients, so the oats were removed, and flour and eggs were added. Spices that had started to be brought over from the east were incorporated into the cake to symbolise the three wise men. Richer families could also afford to wrap their cakes in marzipan, making them look much like the Christmas cake we eat today.

The Irish version is a very rich cake that can contain ingredients that range from fruit and nuts to mixed spices and much more. Many will also contain a large slug of Irish whiskey or even Poitin, all finished off with a thick topping of marzipan icing.

Sea swimming is now extremely popular and despite the temperatures, many friends and families have a tradition of meeting on their local beach on Christmas morning for a swim or a paddle for the less adventurous or perhaps more sensible amongst us.

This is growing in popularity and many swims are now part of charity fundraisers. 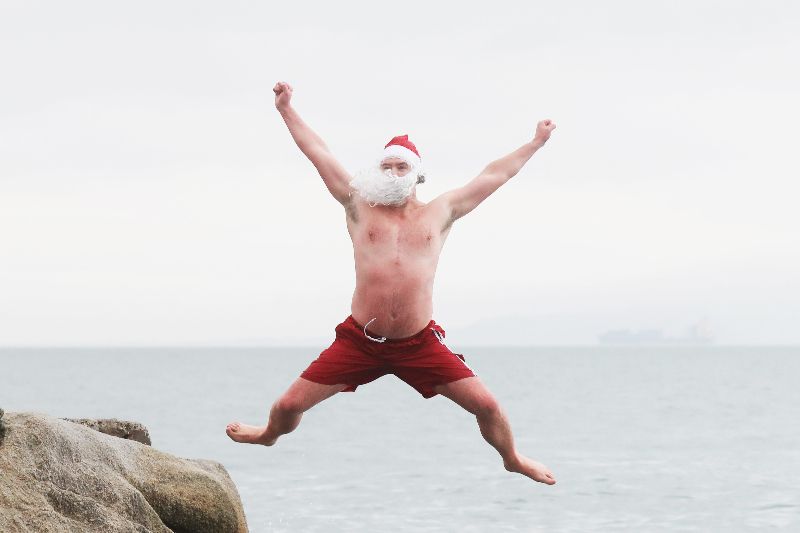 December 25, 2018: A swimmer dressed as Santa braves the Forty Foot in Dublin. (RollingNews.ie)

The Christmas Jumper is fast becoming a modern Irish Christmas tradition. It seems from December onwards, everywhere you go in Ireland; you will see people dressed in these incredible jumpers that are specifically designed for Christmas and really cannot be worn at any other time of year.

Turkeys were first bought into Ireland in the 1530s and looking even further back in time, Christmas tables could feature Geese, pheasant, a wild boars head, swans, and even peacocks.

The first person to eat a turkey on Christmas Day was King Henry VIII. However, it wasn’t until the 1950’s that the turkey was a more popular Christmas meal choice than the goose.

Turkey was popularised for Christmas Dinner so that farmers could preserve their livestock. Eating beef and chicken at Christmas would sacrifice the potential income from the milk and eggs the animal could produce.

A recent survey showed that 87% of Irish people believe that Christmas would not be the same without a traditional roast turkey.

The tradition of the Wren Boys takes place on December 26th, otherwise known as St. Stephen’s Day (Boxing Day in the UK), and involves the hunting of a fake wren and popping it on top of a pole.

The ‘Wren Boys’, dressed in straw suits and wearing masks then walk through the local town or village playing music visiting pubs, and collecting money for charity. 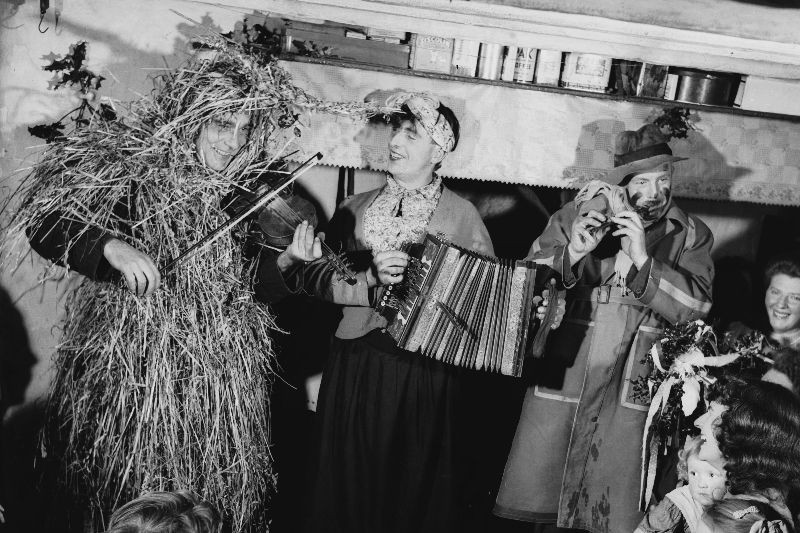 A group of mummers in Ireland celebrate St Stephen's Day or 'Wren's Day' on 26th December by processing from house to house with their instruments, circa 1955. (Getty Images)

No matter what Christmas traditions you partake of in the festive period, I’d like to wish you all Nollaig Shona and may you keep Christmas well.