Cathrena Collins, 23, will represent New York at the 2022 International Rose of Tralee Festival, which returns this August in Tralee, Co Kerry. 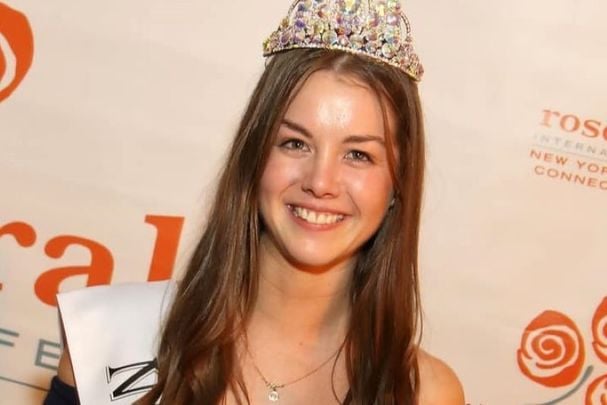 Cathrena Collins, an aspiring lawyer currently attending St. John’s University School of Law on a full scholarship, was crowned the 2022 New York Rose of Tralee on Sunday, May 22 during an event at the Kerry Hall in Yonkers.

Collins, 23, will represent New York at the Rose of Tralee International Festival in Co Kerry which starts on August 19.

Collins submitted a biography that outlines her Irish roots and her academic/civic career since. “I grew up in Eastchester, New York along with my mom, dad, and my two younger brothers, Conor and Ciaran. My dad is Irish American, with family from Clare. My mom was raised in Killarney Co. Kerry and moved to New York at 17,” she wrote.

“My maternal grandparents are from Kerry and Cork, and growing up I was constantly exposed to Irish culture through music, dance, and storytelling.

“From this experience, I developed a passion for discovering ways in which the law can help and protect those in need, and this is ultimately what led to my decision to attend law school. I am currently finishing up my second year at St. John’s University School of Law where I am attending on a full academic scholarship.

“While at St. John’s, I have immersed myself in the school culture and spirit of public service through my work with an Appellate-Division Second Department judge and a New York Supreme Court judge. I have also sought leadership roles which allow me to connect with others.

“While at law school I have integrated my Irish culture. I am co-founder and vice president of the Irish American Law Students Association and a member of the Irish Bar Association.

“Irish culture has always been a huge part of my life. Growing up, I participated in Irish dancing and Irish music. As a family, we returned to Ireland most summers to attend the fleadh cheoil where my brother Conor often competed with his band.

“It was during those trips, which often overlapped with the Rose of Tralee festival, that I have very fond memories of watching the show alongside my cousins, Mollie and Maude, in Killarney. The Rose of Tralee also always has a special place in my heart, as my grandmother was a New York Rose. My grandma often reminisced about her time as Rose, always with a smile as she recounted the many friends she made and all of the fun she had. She also always hoped I would be able to experience the same one day.

“I am both excited and honored to participate in this festival, not only as a tribute to my amazing grandmother but also in celebration of Irish culture around the world. Through this experience, I hope to not only make my grandmother proud but also build lasting friendships, and I wish all the best to my fellow Rose sisters.”