Pete Hamill's 2018 honors at NYU, a celebration of a talented journalist 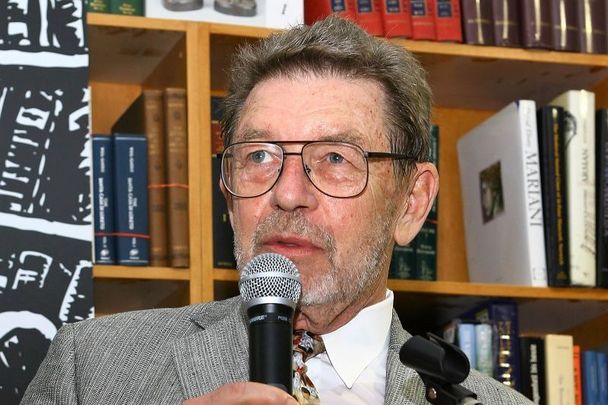 New York’s greatest writer Pete Hamill was feted with humor, anecdotes, and love as hundreds gathered to celebrate the Irish American great at a tribute presented by NYU 2018.

Since it was a tribute to Pete Hamill, we decided to start it at the old Lion’s Head saloon on Greenwich Village’s Christopher Street, the scene of many drinking crimes in Hamill’s A Drinking Life.

The Head, as the regulars called it, is now the Kettle of Fish, the foremost Green Bay Packer bar this side of Wisconsin, but it still looks pretty much the same as it did back in the day when it was inundated with writers from the city’s tabloids and the Village Voice, which was then just ten paces to the west.  I was joined by Mike Coffey, Samuel Beckett scholar, and Peter Doherty, one of the erstwhile barmen from the Head.

We proceeded to march down West 4th Street to NYU and on the corner of Fourth and MacDougal a man in a huge fedora came up to us and asked, “Where’s Washington Square?”

I pointed across the street at the park and said, “There.” Upon further examination, I said, “And you’re Gay Talese. Going to Pete’s bash?” It was truly serendipitous, and we knew this was going to be a special night.

The December 10th program said it was “A Tribute to Pete Hamill,” but it was more than that. The hall was filled with nearly 400 people and a look-around saw many familiar New York faces from the Hamills—Kathy, Denis, and Brian—to the likes of writers Talese, Malachy McCourt, and Nicholas Pileggi. But most of the attendees were just Pete Hamill fans who have read his journalism and books for more than half-a-century.

The affair was hosted by Loretta Brennan Glucksman and the Advisory Board of NYU’s Glucksman Ireland House, of which Pete is a charter member. It was presented in collaboration with the Arthur L. Carter Journalism Institute at NYU and the Keyman Center for the Humanities at Columbia University. Not bad for a kid from Brooklyn like Hamill who dropped out of Regis High School at age 16.

The panel consisted of eleven of the best journalists in this country. It was as if Trump’s “Enemy of the People” had branded together and dared the Bully-in-Chief to show up. The group was made up of Dan Barry of the New York Times, writer and musician James McBride, sports columnist Mike Lupica, veteran New York journalist Joanna Molloy, Jim Dwyer and Sam Roberts, long-time veterans of the Times, speechwriter and columnist Peggy Noonan, novelist and columnist Carl Hiaasen, Mideast reporter Charles Sennott and Pete’s kid brother, Denis, a fine writer in his own right.

Dan Barry kicked off the soiree with his reminiscence of a meet-up with Hamill at his apartment in SoHo. When asked if he could bring anything over, Hamill’s one-word reply was “Scones.” Barry searched high-and-low and could only come up with three sorry-looking scones he was very ashamed of. When he got to Hamill’s apartment amid all his scone angst, Pete ignored them and said, “I’ll take a croissant!”

James McBride, who is black, was next and he got the heavily Irish crowd in his corner by telling them that in the Green Room he heard all the Celts saying, “Suffering is good, money is bad!” He came through with a jazzy poem that left the room roaring.

Mike Lupica remembers being in Florida years ago and taking Pete up to Vero Beach where the Dodgers were holding spring training. Pete is still an unabridged Brooklyn Dodgers’ fan. Pete spied Hall-of-Famer Roy Campanella in his wheelchair down the leftfield line. Pete introduced himself to Campy and Campy guessed that Pete was from Brooklyn. “How do you know?” Pete asked. “Guys your age are always from Brooklyn,” Campy sagely observed. Lupica remembers Pete mostly for his “Grace.”

Joanna Molloy wrote Pete when she found herself captured in the Midwest and longing for the gutters of New York City and how Pete helped her get published for the first time. She remembers Hamill as her editor at the New York Daily News and Pete commenting that “Trump suffers from the hubris disease.”

Jim Dwyer pulled out a 1974 column of Hamill’s about an FDNY firefighter named Harold Hoey, who died in the line of duty helping his fellow New Yorkers. Hamill compared Hoey to the then-Secretary of State Henry Kissinger: “One-hundred Henry Kissingers would not make one Harold Hoey.” Dwyer said that Hamill always “cleared the air, told the truth, gave you hope.”

Mike Barnicle from his perch in Boston always thought of Hamill “not being an uptown guy, but a Brooklyn guy.” Barnicle saw Pete as “a thoroughbred of a human being” who always sought “empathy and justice” for his fellow humans.

Sam Roberts, who has known and worked with Hamill for more than a generation, believes Pete personifies “the survival of local news in New York.”

Peggy Noonan immediately presented her bonafides as an Irish-Catholic daughter of Brooklyn and how as a young girl in New Jersey she used to read Pete’s column on her lunch hour and how Hamill “inspired me as a writer.” She recalled, to great laughter, a column Hamill wrote about “the loneliness of girlfriends of married men at Christmas time.”

She also talked about a column Hamill wrote out of California in 1968 when his friend Bobby Kennedy was running for president. Hamill visited Eugene McCarthy’s headquarters and found they resembled “a Walter B. Cooke funeral home.” [At the time, every New York City bus had a Walter B. Cooke ad proclaiming “We Buried General Grant!”] Hamill then went to Kennedy headquarters and saw the busy-bees’ studs with their new law degrees and their sleeves rolled-up as if ready for combat and concluded that “they were all pricks.” It seems American politics never changes.

Carl Hiaasen got up and stole the show. He freely admitted that he “was not a New Yorker, only 25% Irish” and felt “diminished” by being 75% Norwegian. Hiaasen first hooked up with the Hamills when Pete’s brother, John, gave him a call about a crooked Florida preacher he was investigating for the Daily News. He said meeting John Hamill was like “meeting Mickey Mantle’s brother.” Hiaasen reveals how a novel he was working on about the Florida cocaine wars of the 1980s was sent to Pete and Pete hooked him up with his agent and twenty novels later he is still with the same agent.

Hiaasen called Pete “the most generous person I ever met.” Hiaasen then turned deadly serious and reminded the assembly that at the shooting in Annapolis last summer at the Capital Gazette newspaper, his brother Rob was one of the victims. Hiaasen concluded by saying that Pete was “a national treasure, not just a New York treasure.”

Charles Sennott remembers reading Pete’s The Gift way back in 1984. He was there at the first World Trade Center attack in 1993 with Denis Hamill and since Denis always carried a Con Edison hardhat in the trunk of his car, they walked right by police to get the story of the bombing. Charlie hooked up with Pete as a young reporter in 1988 and even got to take care of Pete’s massive black lab “Garbo,” named after writer Gabriel García Márquez. Pete was the one who encouraged him to cover the Mideast.

Denis Hamill is Pete’s youngest brother. Denis remembers the Belfast commands of the mother and father in the Hamill household: Anne Devlin: “No bigotry in this house!”; Billy Hamill: “Take shit from no one!” Denis remembers losing $10 that Pete gave him to do errands. He dreaded telling Pete, but Pete just said, “Money is just a convenience; don’t attach too much significance to it.” Denis also had effusive praise for Pete’s wife, Fukiko.

Slowly, Pete took the stage. He is frail now, but still had that great head of hair and a self-reflection few would be comfortable with. Pete thanked everyone for the kind words and said, “It was moving without being laid out in a coffin.” He remembered “the ghostly echelon of good guys” no longer with us like Jimmy Breslin and Murray Kempton and others.

He revealed that he got his love of words and books from his mother, Anne Devlin, who got him a library card before he even knew how to read. “The road out of poverty,” he said, “started at the library and The Story of Babar: The Little Elephant by Jean De Brunhoff.” When Pete saw the green jacket of the book, he thought it was an “Irish elephant.” He praised Scottish immigrant Andrew Carnegie for all the free libraries, including the one he used at 6th Avenue and 9th Street in Brooklyn, which is still working today. He went on to say that “You cannot be a writer if you are not a reader.”

It was inevitable that Pete’s love of the Brooklyn Dodgers would surface, and he called his favorite ballplayer, the great Jackie Robinson, “My favorite Republican.”

He was honest in the health travails he had suffered in the last five years which included a heart attack and dialysis and admitted his life was “deep into extra innings.” He praised his wife Fukiko Aoki Hamill for guiding him through such difficult times.

He looked at the Trump administration—perhaps thinking back to the Nixon administration when Vice-President Spiro T. Agnew called his writings “irrational ravings.” (Note: Hamill is still here and loved while Nixon and Agnew are disgraced and dead.) He talked of the “meanness and darkness of the current era,” but said he is still “optimistic” for his America.

In summing up, Pete said he believed in “four-letter words” like “Love, Hope and Free.”

With that Hamill handed over the microphone to the legendary Judy Collins who led the crowd in several verses of “Amazing Grace.”

It was indeed a night to remember.

The documentary “Breslin and Hamill: Deadline Artists” premiered on HBO on January 28, 2019.

*Originally published in 2018, updated in August 2020 upon the death of Pete Hamill.

*Dermot McEvoy is the author of the “The 13th Apostle: A Novel of Michael Collins and the Irish Uprising” and “Our Lady of Greenwich Village,” both now available in paperback, Kindle, and audio from Skyhorse Publishing. He may be reached at dermotmcevoy50@gmail.com. Follow him on his website and Facebook page.