Meet the Irish American who just sold 250,000 copies of the Mueller Report

Nobody read the Mueller Report says the experts but one New York publisher with 250,000 copies sold disagrees. Next week he says sales will explode when Mueller testifies. 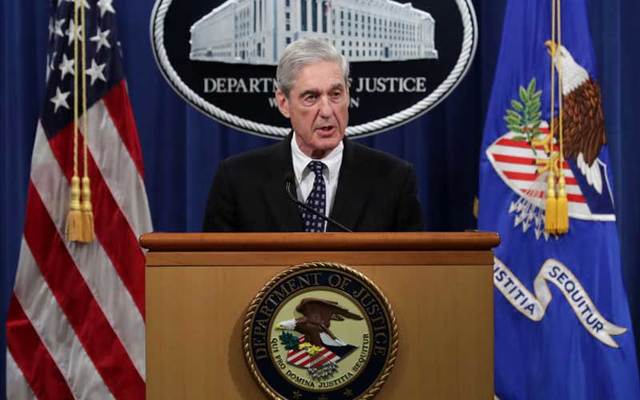 Nobody read the Mueller Report says the experts but one New York publisher with 250,000 copies sold disagrees. Next week he says sales will explode when Mueller testifies.

This week Special Counsel Robert Mueller will be testifying before Congress about his report on whether the Russians colluded with Donald Trump to rig the 2016 presidential election. The cable networks and Internet will be hyperventilating about what Mueller might say.

But the big question remains, are the American people actually reading The Mueller Report?

Yes says one man who should know. Irish American Tony Lyons of Skyhorse Publishing, who made the decision to publish his version of The Mueller Report.

So far the Skyhorse edition of the Report has sold 250,000 copies. It has appeared in the New York Times Bestseller List for 8 of the last nine weeks.

“It was off last week,” said Lyons, “but I’m confident it will be on again next week when Mueller testifies.” The Skyhorse edition has also appeared on the bestseller lists of Publishers Weekly, the Washington Post, the Wall Street Journal and USA Today.

Presently, the Skyhorse editions sits on Amazon.com at #1 in Federal Jurisdiction Law (Books), #2 in Communications & Media Studies, and #3 in Civics & Citizenship. “I think,” says Lyons, “it has a lot more life in it. As I predicted, it’s also a riveting story. It reads like a thriller. You couldn’t make this stuff up.”

Price may have been a factor in the success of the Skyhorse edition. “I certainly think the fact that our edition was $12.99 versus the Washington Post’s edition being $15 has helped sales,” said Lyons. “Part of the reason we were able to charge less is that our book is 240 pages shorter.”

Since the Report is in the public domain it can be published by anyone willing to undertake the publishing costs. According to Amazon.com, there are myriad versions of the Report in hardcover, paper and Kindle.

“I decided to publish The Mueller Report,” said Lyons, “because I felt that it was going to be one of the most important government documents since the 9/11 Report.” Did it have anything to do with the Report being in the public domain?

“Yes, it was free,” responded Lyons, “but difficult to read in the format it was released in. I feel that we performed a public service by reformatting it in such a short time, on nice paper, at a handy trim size, with the references all at the back and with the redactions minimized.

By minimized I mean that we didn’t just reprint all of the redacted lines. Instead, we put one line saying for example ‘16 lines redacted for Grand Jury.’ We won’t win the National Book Award for that work, but we did make it easier for 250,000 people to read the book and we also saved a lot of trees. All of the other publishers wasted a lot of paper.”

The Skyhorse edition is also special because it contains an Introduction by attorney Alan Dershowitz. “Alan, as everyone knows, was a Harvard Professor of Law for over 50 years,” said Lyons. “What people don’t know is that he reads faster and writes faster than any person alive. We were able to go to press 24 hours after the report was released by the Justice Department.

Dershowitz is not a Trump supporter,” asserted Lyons. “In fact, he voted for Hillary Clinton. There are clearly a lot of people who disagree with his analysis and conclusions on impeachment. Another key to success is that Dershowitz has done dozens of TV shows to discuss the Skyhorse edition, including The View, Hannity and many others.

Lyons says as a publisher, “I’m on the side of debate, rather than partisan politics. Alan is willing to debate anyone on this issue, although he recognizes that the country is currently stuck in positions. On balance, I was confident when I asked him to write the introduction that it would help sales. Given the strong sales so far, I think that has been proven to be correct.”

Anticipating Mueller’s testimony Skyhorse has put the Report back on the press. “We just went back to press in anticipation of Mueller testifying,” said Lyons. “We were totally sold out with a couple of thousand backorders. We’re up to about 275,000 copies.”

Lyons sees his publication of The Mueller Report as a positive publishing experience. “Yes,” said Lyons, “I would definitely do this kind of publishing again. I really enjoyed the process. I have pictures that chronicle our work, getting the book to Dershowitz for his intro, sending someone to the Midwest to bring the first carton of copies from the binding line in the middle of night on Easter Sunday.”

Now Lyons waits for the ultimate author appearance to put his Report back on the bestseller lists. Robert Mueller, do your stuff.

*Dermot McEvoy is the author of the The 13th Apostle: A Novel of Michael Collins and the Irish Uprising and Our Lady of Greenwich Village, both now available in paperback, Kindle and Audio from Skyhorse Publishing. He may be reached at dermotmcevoy50@gmail.com. Follow him at www.dermotmcevoy.com. Follow The 13th Apostle on Facebook at https://www.facebook.com/13thApostleMcEvoy/