Ireland is the top choice as financial companies just ship from Brexit Britain to retains access to Europe. 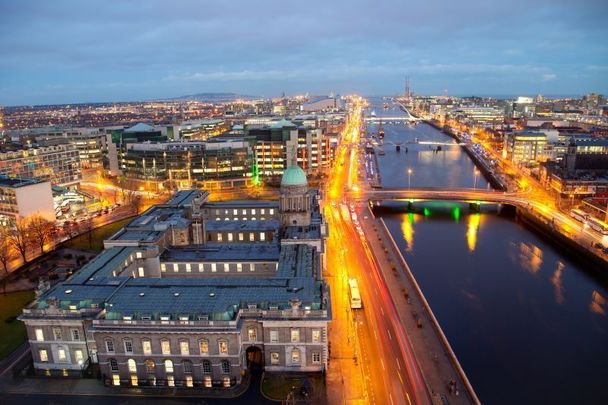 Dublin city from the air: Brexit will benefit the Irish financial sector. Getty

In light of recent developments, the United Kingdom looks more likely than ever to proceed with a no-deal Brexit. UK-based financial companies are relocating to European Union jurisdictions in order to retain access to EU regulations and market access, and Ireland is the top choice.

Brexit is panning out to be bad news for financial companies in the UK, but good news for Ireland’s financial sector. With a no-deal Brexit looming on the horizon, financial services businesses located in the UK are preparing to flee - and they’ll be fleeing into the arms of Ireland.

A recent study shows that Dublin is the most popular choice for companies in the financial services sector to relocate to post-Brexit. According to past data from the Ernst & Young tracker, 29 companies had already committed to relocating their operations following the Brexit referendum, and many more are expected to follow.

According to reports, at least €1.1 trillion in assets has already been relocated outside of the UK since mid-2016. Many companies have also hit pause on their business operations ahead of Brexit and won’t resume until there is more clarity about what will happen next.

The cost of preparing for Brexit on these financial companies - including relocating operations, preparing contingency plans, and getting legal advice - has reached a combined total of a whopping €4.5 billion.

Read more: Brexit - the pros and cons of Irish unity

The reason UK-based financial companies are leaving stems from the uncertainty regarding future regulations and market access. Currently, the regulatory framework governing financial service companies is largely driven by EU regulations. Post-Brexit, the UK will have to devise its own regulatory framework, but there is a large question mark over what this will look like.

While the UK remains in the EU, financial services companies in the UK also benefit from passporting rights that allow them to market services across the EU on a freedom of services basis. Once the UK is out, UK-based companies could lose these market access rights.

The implications of this mean that financial companies are seeing a need to relocate their operations regulated within an EU jurisdiction in order to avoid losing passporting rights and having to deal with uncertain regulatory changes.

Ireland is ideally placed to benefit from this. As well as being an EU jurisdiction, Ireland is also widely known as having centers of excellence in financial services and a solid understanding of how UK markets operate, which is why the country is the most popular choice for financial service company relocations.

Luxembourg and Frankfurt are following close behind Ireland as a top choice for post-Brexit relocation. While a cause for concern for many financial companies, the uncertainty caused by Brexit also provides opportunities for those that thrive on uncertainty. Forex brokers and traders, for example, can profit from the volatility facing both the euro and the pound through smart trading. Both currencies may weaken against the dollar in the event of a no-deal Brexit.