Dublin benefitting more than any other EU city due to Brexit

Ireland's capital is the "biggest beneficiary” as, post-Brexit, financial firms in Britain have relocated activities, staff, and assets to hubs in the EU. 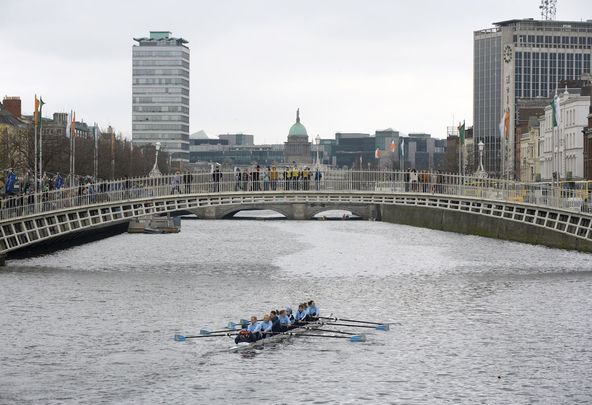 Dublin: The River Liffey, at the Ha' Penny Bridge during the Liffey Descent race. Tourism Ireland

It's no secret that Ireland has suffered more than its fair share of Brexit-related headaches since Britain withdrew from the European Union. However, it's not all doom and gloom as a new study has confirmed that Dublin has benefited more than any other city from London's relative decline as Europe's leading financial center.

According to analysis from think tank New Financial, over 400 financial firms in Britain have relocated activities, staff and a combined $1.4 trillion in assets to hubs in the EU due to Brexit, with the Irish capital named as the "biggest beneficiary.”

And what's more, Dublin could be in line for further boosts as the study warns that the City of London's world-renowned financial district is likely to suffer "more pain."

"We think it is an underestimate and we expect the numbers to increase over time.  We are only at the beginning of Brexit," the study says.

Reuters notes in its report that the EU has offered Britain "little in the way of direct market access for financial services, which were not included in the bloc's trade deal with the United Kingdom from January".

The study reasons, "That access is unlikely to be forthcoming, so it is perhaps better for the industry to take the damage from Brexit on the chin and focus instead on recalibrating the framework in the U.K. so that it is more tailored to the unique nature of the U.K. financial services industry.”

In all, some 7,400 jobs have been relocated from Britain or created at new hubs in the EU, the data suggests.  But some personnel moves have been delayed due to the pandemic-related travel restrictions, banking sources have told Reuters.

Of the 440 relocations of financial firms from the British capital, Dublin is officially the biggest winner with 135, followed by Paris with 102 and Luxembourg with 95.

However, experts at the financial think tank have tipped Frankfurt to eventually emerge as the winner in terms of assets, while Paris is likely to land the biggest number of financial jobs from London.

Analysts have also described Amsterdam superseding London as Europe's biggest share trading center since January as "the most visible sign of Brexit in finance.”

However, the study adds, "The City of London will remain the dominant financial center in Europe for the foreseeable future, but its influence will be chipped away, risking a reduction in Britain's 26 billion pounds annual trade surplus in financial services with the EU."

Meanwhile, a separate report has revealed that Dublin Port is losing out to its Northern Irish competitors as a result of Brexit.

Figures for the first quarter of this year show overall trade with ports in Britain has slumped nearly 30 percent, with trade moving to Northern Ireland.