The Wexford-Pembrokeshire Pilgrim Way follows in the footsteps of St Aidan’s sixth-century journey from Ferns in Ireland to meet his teacher and mentor, St David, in Wales. 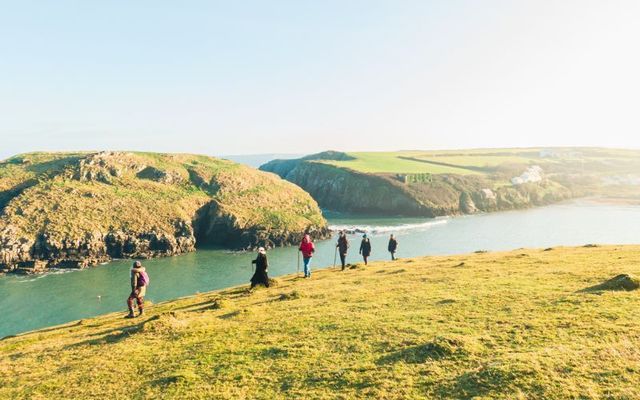 Camino from Ireland to Wales is set to become the leading pilgrim route in Europe. Wexford-Pembrokeshire Pilgrim Way Facebook

The route of a new transnational pilgrim path between Co Wexford in Ireland and Pembrokeshire in Wales has been established.

The Wexford-Pembrokeshire Pilgrim Way, established by Pilgrim Paths Ireland and The British Pilgrimage Trust, is hoped to become one of Europe’s leading pilgrimage routes.

Taking an average of nine days to walk, the new path will consist of five stages in Co Wexford and four stages in Pembrokeshire, with an Irish Sea crossing in between.

The route will become the Camino of Ireland and Wales and will follow in the footsteps of St Aidan’s sixth-century journey from Ferns in Ireland to meet his teacher and mentor, St David, in Wales.

The impact of the meeting between these two famous Celtic saints was felt far and wide across Ireland, Wales and beyond, leading to the establishment of new churches and monasteries and a flourishing of Celtic culture in the Age of the Saints. Characterized by wild Celtic landscapes and rich cultural heritage, the route continues to inspire musicians, poets, and painters who live along its path to this day.

The new pathway was introduced by David Pepper from the British Pilgrimage Trust who said, "We are at the beginning of an exciting journey that will help to revive the rural economy of North Pembrokeshire.

"Pilgrims are likely to spend 2.3 more time in the local community compared to other tourists. This is in the very nature of traveling by foot and traditionally staying one night in each community along the way.”

Tour guide Iain Tweedale added. “Pilgrimage is the largest growth area in tourism at the moment. And the beautiful landscapes, nature, and art of Pembrokeshire, along with the destination of St Davids Cathedral and its connections to Ferns in Co Wexford make this route unique and distinctive."

The Irish route of the Wexford-Pembrokeshire Pilgrim Way

Your pilgrim journey begins at the holy well of St Aidan of Ferns. Here, custom dictates you fill a small water bottle and carry it to St Davids in Wales. Now walking as a pilgrim, you pass St Edan’s Cathedral (Church of Ireland), which is considered the smallest cathedral in Europe, and then go by the ruin of St Mary’s Abbey.

At Boolavogue you will visit the Father John Murphy Centre and beyond this, you will encounter a "lios" or fairy fort.  From the late Iron Age to Christian times, Irish people built these circular structures with earthen banks to afford protection in times of war for humans and livestock. Folk tales have grown up around these that relate that a curse will be enacted upon those who disturb or destroy them, which is probably why thousands of these structures still survive in Ireland.

On Oulart Hill, you will pass the site of a great victory for the United Irishmen in 1798. A short diversion from a carpark takes you to the magnificent Tulach a’tSolais.

You will pass the Bygone Days Storytelling House and Fr John Murphy Monument on the site. The thatched building style of the Storytelling House was once common across rural Ireland but is now most common in Wexford, which has the largest number of such cottages.

The route then takes you into Kilbride Forest, following a sylvan path to a farm and then onto the important 1798 graveyard of Ballyhuskard. After beautiful valley views, you arrive at Oilgate to end this stage at St David’s Church.

Just beyond Oilgate lies St David’s Well which is reputed to have been blessed by St David on an Irish visit. Tradition holds that pilgrims fill a second bottle with water from the well that is believed to contain curative properties, and convey it to St Davids.

After crossing the River Slaney, follow the Three Rocks Trail, passing a Famine Wall before ascending Forth Mountain to the Windgap Rocks, which offer views over the serenely beautiful lake at Carrigfoyle Quarry. Your journey continues to the landscaped grounds of Johnstown Castle, home to a renowned apiary (a place for bees).

Piercestown to Our Lady's Island

This stage takes you through an area of Wexford that is rich with echoes from the Norman Conquest of Ireland. One such bequest was the Yola Language, a form of old English that was carried to Wexford by the Norman invaders and spoken in this area for hundreds of years. The Yola language became extinct with the last native speaker dying in 1998, but many words and phrases still survive in the locality.

The main highlight of this stage is the end at Our Lady’s Island – make sure that you allow plenty of time to explore this renowned pilgrimage destination.

Our Lady's Island to Rosslare

The fifth and final stage of the Irish section of the route to Rosslare. From the Church of the Assumption, you follow the old pilgrim path to reach Our Lady’s Holy Well. Fill your third bottle with the water from this well and carry it to St Davids.

Afterward, go up the road to the Cross of the Shad. Secret masses were held here in the open air during the Penal times when celebrating mass was forbidden. If the tides are favourable, bear right at Shard Crossroads and follow St Margaret’s Lane to the beach. From here, it is possible to walk by beach and clifftop path all the way to Rosslare Europort to continue your journey in Wales.