Visit some secret, historic and spooky spots along Ireland's 3,000 miles of enchanting coastline. 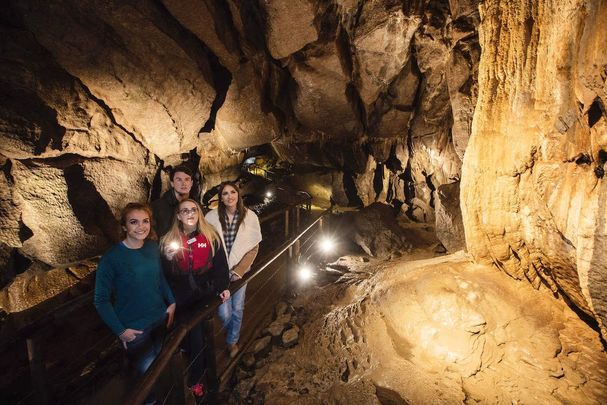 Explore the bedrock of Ireland with a visit to these secret, historic and spooky spots along the island's 3,000 miles of enchanting coastline.

Situated in the cliffs of Rathlin Island, County Antrim, most of the caves here can only be reached by boat. Bruce’s Cave, located beneath the East Lighthouse, is named for Robert the Bruce, who hid there in 1306 after his defeat by the English at Perth.

According to legend, the warrior watched a spider repeatedly trying to reach the roof of the cave until it finally succeeded. Inspired by the spider’s determination, Robert the Bruce returned to Scotland to defeat his enemies and gained the Scottish throne at the battle of Bannockburn.

You can visit Rathlin Island by boat from Easter to September.

Located in Glenariff, County Antrim, this cave provided shelter to local elementary school students in the 18th century. At the time, education was carried out in ‘hedge’ schools, so-called because classes were held outside. The students in Glenariff would retreat to this cave during bad weather. The cave is marked by a memorial stone.

The Aillwee Cave lies in the heart of the Burren, close to the village of Ballyvaughan in County Clare. It was discovered in 1944 by Jacko McGann.

The cave is open for tours. The site also includes tea rooms, a gift shop, and the Burren Bird of Prey Centre.

The 35-minute tour of the caves with an expert guide allows visitors to view large calcite formations, underground streams, and a waterfall, and the only bear pits – hollows scraped out by brown bears – to be found in Ireland. Aillwee Cave is open year-round.

Doolin Cave can also be found in the Burren region of County Clare. Previously known as ‘Poll an lonain,’ this cave was discovered in 1952 and has six miles of passages.

The cave's most remarkable feature is “The Great Stalactite,” which at 7 meters (23 ft) is one of the largest free-hanging stalactites in the world.

You can view this great geological wonder during a one-hour tour of the cave.

The site has an exhibition center, shop, and cafe.

The Maghera Caves and Port in Ardara, County Donegal is in one of the most scenic areas in Ireland. Natural sea-erosion caves lie along a wide, silver beach below majestic mountains that hide an ancient castle.

The road to the caves lies on the southern shore or Loughros Beg. Streams tumble through the steep rock faces. The most spectacular of these is Assaranca Falls. 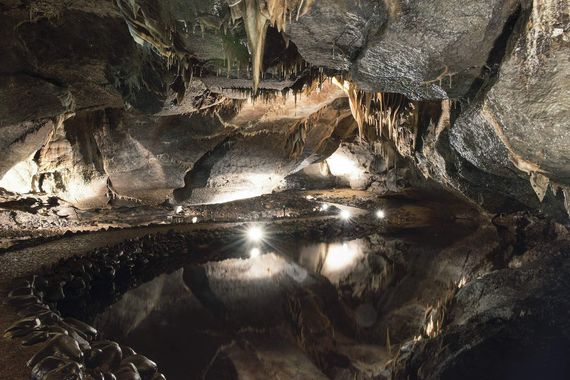 The site also has an exhibition area, an audio-visual theater, a gift shop, and a restaurant.

Crag Cave, in Castleisland, County Kerry, was discovered in 1983 and is thought to be over one million years old. It is one of the longest caves in Ireland and has two levels.

Guides take visitors on 30-minute tours through 400m of the 3.8km long cave to view the cave’s stalagmites and stalactites. Be sure to bring a coat as the temperature in the cave is around 50 degrees Fahrenheit!

The first explorers of this cave named one of the caverns “Minas Tirith” after the great city of Gondor in Middle Earth from “The Lord of the Rings.”

The Crag Cave has a visitor center with a restaurant and gift shop.

Dunmore Cave, in Ballyfoyle, Co Kilkenny, is a National Monument and boasts some of the finest calcite formations in Ireland. The cave, which consists of a series of chambers formed over millions of years, has been known to man for centuries.

It has a huge and imposing entrance and was described in folklore as “the mouth of a huge beast, with ten thousand teeth above his head and as many under his feet.”

The cave, which was first mentioned in the 9th-century Irish Triads, has a long and storied history. In 928 AD, the cave was plundered by Godfry and the Vikings of Dublin. During the raid, 1,000 people were massacred and numerous human bones discovered in the cave are thought to be the remains of the victims. The cave is known in Old Irish literature as one of the darkest places in Ireland and is said to be the place where the monster Luchtigern, ‘the Lord of the Mice,’ was slain.

The Dunmore Cave is open to view and has a visitor center with exhibitions and displays.

A 45-minute tour takes visitors underground to the mines coalface where methods used to extract coal are demonstrated. A history tour tells the origins and history of the Arigna coal mines and its impact on the local community.

The site also has an exhibition area, a coffee shop, and a souvenir shop. 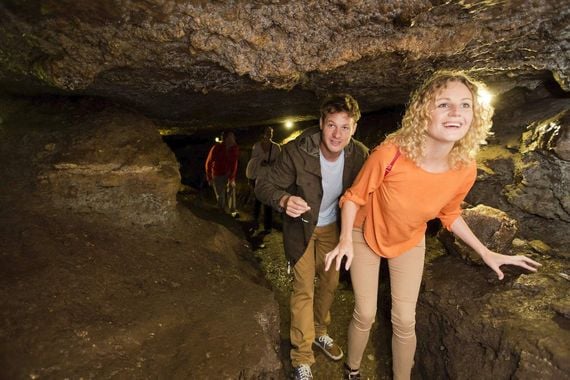 Mitchelstown Caves in Co Tipperary were discovered in 1833 by Michael Condon, a local farmer. Condon was breaking stones for his house when he lost a crowbar in a crack. He found the cave while trying to locate his tool by digging along the crack.

The caves are considered some of the most spectacular caves in Ireland and are amongst the finest limestone caves in Europe. Tours are conducted daily through almost half a mile of this cave, which includes three massive caverns.