St. Patrick’s Day pilgrimage in Connemara - the trip of a lifetime

Connemara holds on to the ancient traditions of St. Patrick at a shrine nestled deep in the Maumturk Mountains. Literally magic! 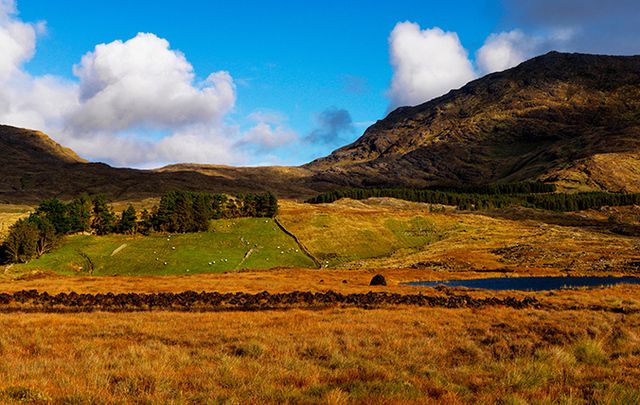 Connemara holds on to the ancient traditions of St. Patrick at an off-the-beaten-path shrine nestled deep in the Maumturk Mountains. Tourism Ireland.

Connemara holds on to the ancient traditions of St. Patrick at a shrine nestled deep in the Maumturk Mountains. Literally magic!

For many, St. Patrick's Day means green beer and parades, parties and celebrations. But that's a distinctly modern idea.

The first St. Patrick's Day parade wasn't even held until 1762, and then, it was in New York City and arranged by Irish soldiers in honor of their homeland's patron saint. Ireland's own official St. Patrick's Festival was only given the government's stamp of approval in 1995, and has since grown to a four-and-a-half day celebration held in Dublin.

But nestled deep in the Maumturk Mountains of Connemara is Mamean (sometimes called Mam Ean or Maumeen), an ancient, off-the-beaten-path shrine where pilgrims are holding onto the ancient ways. The trek to get there is no walk down to the corner pub, and it crosses through some of the most beautiful countrysides in the country.

Surrounded by untouched mountains and rocky, sheer fields separated by centuries-old stone walls where sheep climb like mountain goats, even the walk is a stunning reminder of the hundreds of years of history that's roamed the wilds.

The chapel itself, somewhere around halfway through the mountain pass, is thought to be one of the smallest in Ireland, and according to legend, it was the place St. Patrick went to bestow his blessing on the wide, rugged terrain of Connemara.

The site itself is incredibly ancient, pre-dating even St. Patrick himself and once closely tied to Lughnasa, the great fire festival that marked the beginning of the autumn and of the harvest season. When Christianity swept through the area, it brought with it a new meaning to the site. Tradition says that when St. Patrick walked through Connemara and climbed the mountains, it was at the holy well that he stopped at to bless some of the wildest lands in Ireland.

Today, visitors can still see the ancient holy well, and a series of stone circles meant to represent the Stations of the Cross. There's also a Mass Rock, which has a history of its own. During the 18th century, the practice of Roman Catholicism was outlawed, and the faithful needed to find covert ways – like the simple, discreet Mass Rock altar – to celebrate their faith.

There are a few more modern buildings there, too, including a small chapel that stands next to the cleft in the rocks known as St. Patrick's Bed. In 1986, a statue was erected; it depicts St. Patrick as a shepherd, with a sheep at his feet.

The time between the secrecy of the 18th century and the 1980s revival was something of a trying time for Mamean. During the 19thcentury, local feuds made the annual pilgrimages to the site a rather complicated affair that became less about religion and more about confrontation. Tensions between the two different factions – those from Joyce Country and those from Connemara – became unbearable, especially when some started pitching tents and serving poitín among those that came to say their prayers. By the turn of the century, there were few people heading up to the chapel in Mamean anymore, but a revival came in the 1980s thanks to Fr. Michael McGreil and a devoted community.

Because of its connection to Lughnasa, Mamean is the site of an annual pilgrimage in August, too. While the Mass and the Stations of the Cross is a somewhat solemn, respectful affair, now it's also followed by music, dancing, and the leaving of small offerings at the spot where St. Patrick once knelt.

Getting to the pilgrimage site is no small challenge, and although there's a couple of different ways to get there, most choose to start from the parking area off the N59. From there, expect a good few hours of hiking to get up (and back) through Mamean (or from one side to the other, which takes hikers from the Inagh Valley to Maam).

The name of the pass itself means “pass of the birds”, and those that head off the regular tourist route and into the Connemara Mountains will find it's a very apt name, especially stopping to look down over the sprawling, rocky bog lands below.

Have you or would you celebrate St. Patrick’s Day with a pilgrimage to Mamean? Is it important to you to celebrate the spiritual aspect of St. Patrick’s Day, as well as the national pride? Share your thoughts in the comment section, below.

Originally from Attica, NY Debra Kelly is a freelance writer and journalist who has seen most of the U.S. during her travels. Ready for something new, she's now living in the wild hills of Connemara with her husband and plenty of animals. She is a frequent contributor to Urban Ghosts, Listverse, and Knowledgenuts.