Participants must scale Carrauntoohil, kayak for 6km, paddleboard at night, ride the Atlantic waves, and cycle along a steep 90km scenic route as part of the challenge. 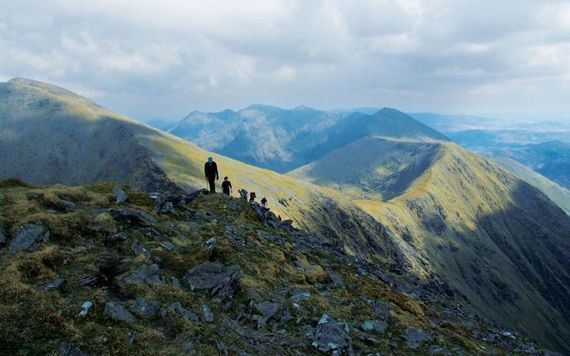 Participants must scale Ireland's highest peak at Carrauntoohil as part of the challenge. Failte Ireland

The tourist board of the scenic Reeks District - home to the MacGillycuddy's Reeks mountain range - recently launched the Big Five Challenge, giving participants the chance to climb Ireland's highest mountain, Carrauntoohil; kayak the length of the Caragh Lake; cycle 90km circuit around the "Ring of the Reeks"; ride the waves on Inch Beach; and paddleboard at night on Coomasaharn Lake.

The challenge is not for the faint-hearted and participants have 12 months to attempt all five tasks and complete the task.

However, adventure sports enthusiasts are encouraged to try and complete the challenge in five days to earn a place on the "Big Five Wall of Fame" in Killorglin.

Adventure sports writer Stuart Kenny recently took on the five-day challenge for Red Bull and documented the grueling challenges and the breathtaking natural beauty of the scenic reeks district.

Kenny first climbed Carrauntoohil as part of the Big Five Challenge, taking on the famous "Devil's Ladder" to reach the mountain's 1,038-meter peak. The ladder is essentially a collection of boulders that allow climbers to scramble to a plateau just below the summit.

He detailed the panoramic view that greets climbers at the summit, stretching from the Atlantic Ocean to the rest of the MacGillycuddy's Reeks mountain range, which is home to 10 of Ireland's 12 highest peaks.

The pair were the only kayakers brave enough to test the waters on the morning in question and Predenergast said that Reeks District needs to find a balance between becoming popular and retaining the remoteness that makes locations like Lake Caragh special.

Next, Kenny took on Cloon Lake at nighttime armed only with a wetsuit, a paddleboard, and a glowstick.

The Dark Sky Reserve at Coomasaharn Lake is one of only four reserves in the world with a "gold tier" rating, meaning that it offers spectacular views of the stars above due to a low level of light pollution.

Kenny described the experience as "serene".

"The water is calm, the moonlight illuminates our paddle strokes, and bats flutter past. It’s the ultimate meditative experience and a definite once-in-a-lifetime experience on the dark side of the Cloon," Kenny wrote.

The Red Bull writer took on the Atlantic waves at Inch Beach for his next challenge, braving the icy waters of the ocean to tackle the relentless waves on Ireland's southwest coast.

His final challenge took him on a demanding 90km cycle along the "Ring of the Reeks" - a hilly loop that takes cyclists around the MacGillycuddy's Reeks with Carrauntoohil as its focal point.

He described a particularly grueling 4km ascent around 60km into the cycle but said that the difficult climbs reward cyclists with spectacular views of the surrounding countryside.

"It’s the climbs that steal the show, though. From Blackwater to Molls Gap must be one of the most typically Celtic, beautifully wild roads in Ireland."

Anyone wishing to take on the Big Five Challenge can pick up a "passport" from the Reeks District visitor center in Killorglin and can have an adventure ticked off by a participating provider at each location. Anyone who completes the challenges in five days or less will earn a certificate and a space on the wall of fame.

Would you take on the Big Five Challenge in just five days? Let us know in the comments below.