From reveling in the beauty of the Botanic Gardens to exploring the history of the GPO we're looking to our next vacations! 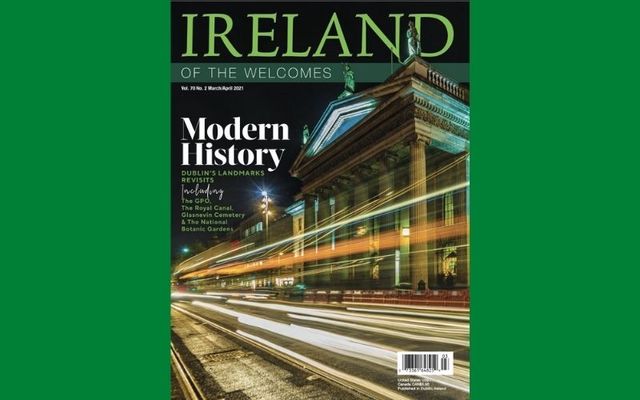 The March / April 2021 issue of Ireland of the Welcomes.

This time of year is always so filled with promise. From the "grand stretch in the evening" to the first showing of snowdrops and daffodils, nature is indeed blooming everywhere you look. Including in the March / April issue of Ireland of the Welcomes.

Subscribe now to Ireland of the Welcomes magazine, a print magazine released six times a year. Sign up now!

And with that in mind in the March / April issue of Ireland of the Welcomes, we visit The National Botanic Gardens, Glasnevin, and explore the award-winning greenhouses, walks, and extraordinary plant collection. Staying in Dublin, we also shine a light on the historic General Post Office and the often-written about Royal Canal.

History is, of course, that which ties us all together, and in this issue, we look at ten Irish people who made their mark on global history but between the jigs and the reels are possibly not given the recognition they deserve.

We also visit Maynooth and take stock of Ireland's oldest tree, as well as investigating the life and times of architect James Hoban who designed The White House.

Check out what's inside the March / April 2021 issue of Ireland of the Welcomes.

A roundup of what's on and  where, including exhibitions, the St Patrick's Festival, and more

A reflection on the people, places, and memories that make Ireland  so special

A famous resting place for over  one million souls, including famous historical figures

An exclusive extract from Sophie White's new book Corpsing, ahead    of its release

The Irishman who designed The White House

A look at The National Botanic Gardens, Glasnevin

The latest releases from Irish authors

Subscribe now to Ireland of the Welcomes magazine, a print magazine released six times a year. Sign up now!