The rocky, uninhabited Co Kerry island was used as a location in two Star Wars movies, "The Force Awakens" and "The Last Jedi." 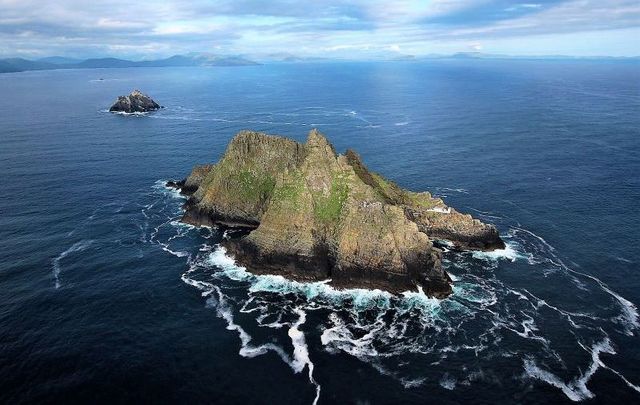 Skellig Michael has been named one of the most beautiful filming locations in the world by Big 7 Travel.

The global travel website has recently released its official list of ‘The 50 Most Beautiful Movie Locations in the World,’ and the County Kerry island made the cut.

The uninhabited, rocky island, which rises 230 meters above the sea, is located eight miles from the small fishing town of Portmagee.  Also known as Great Skellig, it is the larger of two islands located west of the Iveragh Peninsula in Co Kerry. The smaller of the two islands is known as Little Skellig. ( ‘Skellig’ comes from the word Sceillic, meaning a steep rock.)

Skellig Michael holds the ruins of an ancient monastery and was named a UNESCO World Heritage Site in 1996.

The island, which made number 38 on the Most Beautiful Movie Locations list, was used as a location in two recent Star Wars movies, "The Force Awakens" and "The Last Jedi."

Big 7 Travel writes: “Set on the remote island of Skellig in County Kerry, Skellig Micheal plays the role of other-worldly Ahch–To. The location first features in The Force Awakens, but it then plays a huge role in the latest installment, as Luke Skywalker trains Rey.

"Despite its remote location, there’s been a huge surge in Star Wars-related film tourism. Thousands of aspiring Jedis make a pilgrimage to the Wailing Woman rock every year.”

According to the travel site, only destinations “most worthy of being on the big screen” were chosen for the list. The criteria used was the “wow-factor of the setting, the site’s importance and impact on the scene, unique features of the location, and the overall fame of the movie itself.

Angkor Thom, Cambodia, where “Lara Croft, Tomba Raider” was filmed made the number one spot on the list, followed by Salzburg, Austria, the site of “The Sound of Music”; Skiathos, Greece, the filming location of “Mama Mia!”; Petra, Jordan, featured in “Indiana Jones and The Last Crusade”; and Savoca, Italy, which was used as the village of Corleone in “The Godfather.”

For the full list of the world's most beautiful filming locations, visit here.